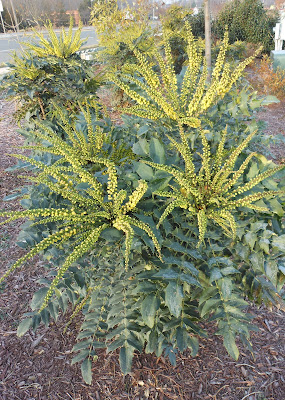 For us at the garden center, Thanksgiving marks the end of the garden shopping calender.  The customers switch gears from working outside in the garden to hanging swags and trimming the Christmas tree. But, for a few who venture out into the quiet shrub sales area, you'll be greeted by the blooming event of Mahonia's.

Often overlooked during the growing season, mainly because of its prickly holly like leaves, Mahonia's put on a show of bright sulfur yellow flowers that sprays out like water from a fountain.  Though missed by fair weather gardeners, die hard types still looking for horticultural fix, get to benefit from this explosion of color.  While the blooming season is magnificent, its habit and display of whorled frond-like foliage, makes for a year round, stately statuesque presence in any garden.

The Mahonia family contains about 70 species often found in woodlands from the Himalayas, to East and Central Asia and into the America's.  Commonly referred to as Grape Hollies, the blue-black semi-edible berries hang in clusters after flowering.  Related to Barberries, Mahonia's have a bright yellow inner bark that contains an alkaloid called Berberine, which is responsible for the color.  The colorant has long been used to dye clothing, wool and leather but is now being studied for its potential medicinal use in reducing cancer growths, lowering cholesterol and over coming insulin resistance.

Mahonia x media (media - meaning middle, or between, referring to the mix of two parents) was a result of a accidental cross between Mahonia japonica and Mahonia lomariifolia that occurred naturally.  Slieve Donard Nursery in Co. Down, Ireland was the birthplace of Mahonia x media, starting in 1952 with the discovery of seedlings showing slight foliage variations.  Six of the seedlings were selected for planting by Sir Eric Savill, who at the time was Director of Forestry to the crown estate of Windsor Great Parks, in England.  When these seedlings began to flower in 1957 it became evident that they were different from what the parent plants were.  The first seedling to make it to market was named 'Charity',and can still be found to this day at Savill Gardens. 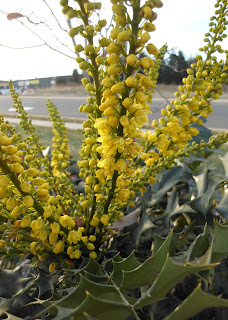 'Winters Sun' came from the same linage as 'Charity' and became registered in 1966 after it showed a greater dense, compact growing habit when compared to others in the 'x media' group.  The bright yellow flowers also have a better fragrance, an added benefit for any early winter garden.   I have seen 'Winters Sun' flourishing in an unprotected, full sun location with little sign of stress, provided it has good access to moisture during the hot summer months.  However, all Mahonia's would favor the filtered sun of a cool, woodland garden.  Once established, they can tolerate drought for an extended period with little consequence.   In my garden, it has proved successful in deterring kids from jumping the fence looking for a short-cut around the neighborhood.   Apart from that, it also works well on deer that also dislike it presence.  Growing to a large 8 to 10 ft vase shaped form, it requires little pruning, though some stems can be reduced back after flowering to encourage a shorter, bushy habit. 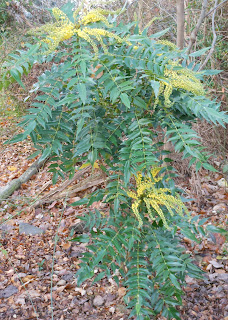 I have read some comments about Mahonia's needs to cross-pollinate to produce berries, though doesn't seem to be mentioned enough to draw a strong conclusion.  It would still be advisable to include another specimen of its own species or one of a compatible species to ensure berry set.  One reference I read highly recommended our own native Oregon Grape Holly, Mahonia aquifolium, a beautiful, lower growing species, as a suitable partner for Mahonia x media.

Both 'Charity' and 'Winters Sun' are guaranteed to provide season round interest.  Their architectural presence and explosion of color will anchor them as a focal point from which to design other combinations from.  While it's not a shrub that will hug you back should you have the urge to show it some affection, it will grow into a loyal work horse of the garden, commanding respect while extending the season of interest, well into early winter.

Posted by Robert Woodman at 2:36 PM

Email ThisBlogThis!Share to TwitterShare to FacebookShare to Pinterest
Labels: Mahonia