Once upon a time, long long ago, as all good stories begin, a developing colony stood on the frontier of becoming the next biggest tea producer in the world.  That colony turned out to be the United States and yes, one of the alternative crops that were considered for production in the south was tea.  In fact there is still  two working tea plantation in mainland America, with the biggest in South Carolina, the Charleston tea plantation  that produces the 'American Classic tea' that is the official tea of the White House.

The history of both Tea and the United States never had a comfortable time together.  Dumping tea into Boston harbor was a revolt against Britain's taxation of this commodity without having any colonial representation regarding matters of the new world back in England.  Some would say it was the flash point to the beginning of the war of Independence so its not surprising that tea never really caught on here.  Tea is labor intensive and expensive to harvest, costing eight time more here per pound than in Asia.  The highest grades of tea are often  pick by hand to ensure the most tender of shoots are selected.  A modified cotton/tobacco harvester is used at the Charleston tea plantation to keep overhead cost low but isn't as precise when harvesting.

Camellia sinensis or Chinese Camellia is the species whose leaves are used in the production of tea.  There are two varieties, a little leaf, used for Chinese tea and the bolder flavored big leaved used to make Assam Tea.  Both are processed differently even with in their own groups to attain different levels of oxidation that change the flavors or can be blended just like wine to achieve a desired taste.  Some can be cut, brewed or steamed fresh while others are roasted or dried to intensify the flavors.  Even the twigs can be boiled to make a tea.  The main groups however include, Green, black, white and Oolong teas. 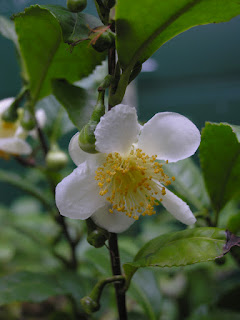 Chinese Camellia are found growing naturally from mainland China and into Southeastern Asia but has be cultivated across the world where the environment permits.  It is a large shrub to small tree but is usually kept clipped to around 6ft when used for its young leaves.  The fall flowers are a simple creamy white, fragrant,  five petaled  bloom that when compared to other Camellia's won't impress but will readily produce seeds can be pressed to extract tea oil used for seasoning and cooking oil too.  Tea oil should not to be confused with Tea Tree Oil found in a native Australian tree called Melaleuca alternifolia, a Myrtle relative.

Before you can make your own tea we need to look at how best to grow them so you can start your own backyard plantation even in Northern Virginia.  I'll cover the tea making process on a later post once I've had a chance of growing mine on for a bit.  Its best to get the plants growing for at least 3 years before you beginning plucking them for a brew so be patience.

All Camellias like well drained soil that is moisture retentive without becoming water logged.  Soil should be slightly acidic so incorporating sphagnum moss peat or a reasonable substitute is recommended.  Plants are hardy to zone 7 or higher but adapts well to container growing if your in lower zone and are prepared to move them inside a house or conservatory for a winters rest.  Full sun or light shade is recommended but for us in Northern Virginia, watch out for winter dessication where the foliage will freeze dry on the plant if exposed to sun and wind without access to available moisture.   Tea Camellia's prefer a minimum of 50 inches of rainfall a year to be productive so be prepared to supplement in periods of drought.  All things said, its not a hard plant to get established, the trickier part is the actual tea processing part.

So for now lets get our Camellia's happily growing in the ground and stop for a quick spot of tea.  All this writing has worked up quiet a thirst and the civilized thing to do would be to satisfy it.  All that's left to say is one lump or two..........Until I write again

Posted by Robert Woodman at 9:54 AM