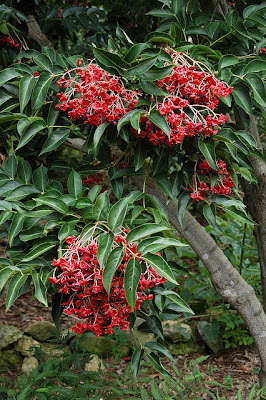 I recently returned from the PANTS show, not for trousers but rather the acronym for Pennsylvania (PA) Nursery Trade Show.  PANTS is one of a few summer trade shows to be held around here, but dwindling numbers is threatening its existence for the future. Though the scope of plant material was limited one tree did capture my attention and I wouldn't doubt that it was the show stopper for the whole event.  That tree was Euscaphis japonica, or otherwise known as the Asian Sweetheart tree.


This was my first encounter with Euscaphis and it was love at first sight.  I found that I kept returning to the tree, looping around the whole convention center, just to have another look.  We have the late JC Raulston to thank again for its introduction into North America.  He discovered it on the Korean Peninsula in 1985 and brought it back to North Carolina for assessment, where it has flourished since.  Another famous tree man, Don Shadow penned the common name 'Sweetheart Tree' in recognition of its heart shaped red berries that pop open to display shiny black seeds, similar to Euonymus or spindle bush, but not related. 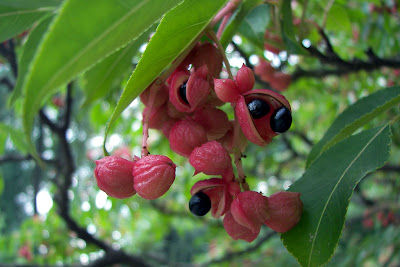 Due to the tree being rare in cultivation little is known about its hardiness, but it has survived into zone 6, with the possibility of going lower.  The durability of the tree seems to be endless, taking full sun to shade, droughts, floods and every soil condition you can think of.  The long fruit show (possibly up to 3 to 4 months) against the dark glossy foliage and the striped bark coloration increases its desirability for use in the garden.  In warmer climates the fruit is more pink in coloration but for us in Virginia, we can expect the bright cherry red color to come through.  Glossy foliage is neatly tiered on the branches and the overall the tree has shown no known pest or disease problems.

So why don't we see this tree everywhere?  Propagation is a long and complex process. So far it has only been successful from seed that appears to have a double dormancy before germination.  This requires the seed to go through 3 months of cold moist temperatures, followed by 3 months of warm moist conditions, then repeated again. Once this conditioning is done, you should have a good germination rate.  Vegetative propagation from stem cuttings have little to no success rate and I haven't heard of anyone grafting as an option.  Seeing as seed is the only successful way to reproduce the tree, it opens up the possibility for variants to appear amongst the population, an exciting prospect for any patient gardener!  From germination, it is said to grow vigorously and responds well to heavy fertilization in containers to further speed up the growth. 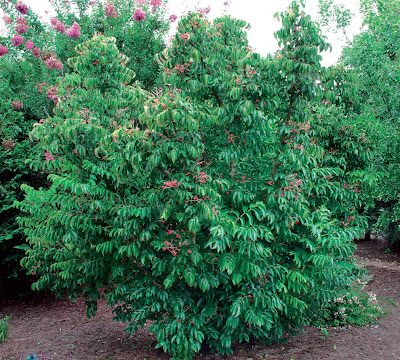 If the propagation nut could be cracked we could be looking at a viable alternative to the over-planted Crape Myrtles in our landscape, but theirs room for both.  I've myself have track down a source for small seedling sized trees and already have placed an order for late summer, once the heat of summer breaks its grip over the garden.  The only problem is now telling my wife that another Sweetheart is coming to live with us!  Wish me luck!
Posted by Robert Woodman at 8:15 AM