Many have debated if Albert Einstein really once said: "if the bee disappeared off the surface of the globe, then man would have only four years of life left. No more bees, no more pollination, no more plants, no more animals, no more man." Regardless of who coined the quote, the plight of our honey bees is clearly in a decline. Mites, colony disease and even cell phones have had the finger of suspicion pointed at them, but a new alarm raise may point the figure at us gardeners.

'The Garden' magazine, published by the Royal Horticultural Society reported; 'that research done by the European Food Safety Authority (EFSA) has identified three neonicotinoids (of which there are seven in the group) - clothianidin, imidacloprid and Dinotefuran as representing an 'unacceptable danger' to bees'. Many of these chemicals have been used widely in agricultural applications, however imidacloprid is found in many garden related chemicals produced by Bayer, while Dinotefuran is used in some of Scotts products. 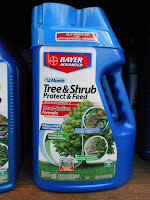 I've often heard people in the garden center refer to these products containing imidacloprid as 'miracle cures' against a vast array of pest problems. In fact, so good is the product that you virtually don't even need to know what the pest is anymore to be able to kill it. Homeowners freely admit to using the chemicals routinely as a yearly precaution, regardless of whether theirs a pest or not (a practice not recommended until the pest becomes present). Such has become the mindset that even the manufacturers have included fertilizer to further encourage it's sometimes unnecessary routine use.

So what's all the fuss, after all its just a bee, right? Well, bee's are responsible for pollinating about a third of our dietary needs. One estimate puts their worth at around $224 billion for the crops they produce worldwide. If that little yellow and black buzzing machine disappeared the price of food would immediately go up.  Similar to the price of oil, jeopardising food production threatens the domestic security of any country.

One company has even gone as far to develop a vibrating probe, similar to electric toothbrush that comes with a plastic spoon, to help replace the diminishing bee population. 'Vegibee' comes in either battery or in the environmentally friendly, 5 speed rechargeable option for you Prius driving folks out there. It works by placing the vibrating head of your probe against the flowers most sensitive spot, thus making the flower unload its pollen onto a plastic spoon that comes with the kit. Once you have enough of this sweet pollen powder to go around, you can then offer it up to other flowers to score a hit.  It's all very Sex and Drugs, but without the rock and roll.  To think someone actual went to all the trouble to create a honey bee alternative.  Its a shame they couldn't applied the same thought to protect natures original pollinators.  Forgive me, I'm not a capitalist, just a gardener!


So, can we blame these chemicals for Colony collapse? Its not the sole reason for honey bee decline, but the findings from the EFSA study shows enough of a smoking gun to make you thing otherwise. Some garden centers and retail chains in England have already began voluntarily pulling any products containing imidacloprid from it's shelves. Though, the amount removed is nothing more than a drop in the ocean, many feel its a small price to pay. As more publicity arises, many more green industry companies may be forced to reconsider carrying such products in the face of rising concern.

If you're like me, your probably holding your head in their hands out of frustration. Yet another chemical is on the verge of being pulled because of its harmful effect on our environment. But, a solution may be at hand. Bayer, the company that brought you imidacloprid also manufactures Aspirin.   Not only will it help you with your pounding headache but studies have shown that giving Aspirin water to your plants boosts their immune systems. One report I read suggests that its like 'giving your plant Echinacea so they don't get a cold', unless of course it's another Echinacea!

So before you reach for that blue bottle of chemical, consider if your plant just needs an Aspirin instead. You'll be replacing one harmful chemical of another lesser one, but at least the flowers can't complain of having a headache when it comes time to fornicating with some help from the bees!
Posted by Robert Woodman at 3:30 AM