In Memory - Bebe the dog

Whoever coined the phrase that 'a mans best friend is his dog' wasn't far wrong.  Today I said goodbye to my best friend and companion, 'Bebe'. 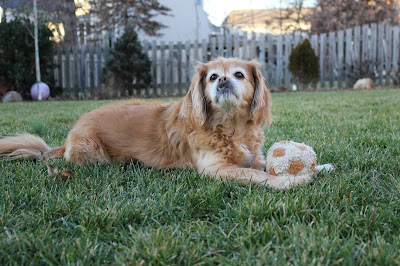 Having a dog had always been a boyhood dream of mine.  It was only later in life, when all the stars and planets all aligned that I could make a dream it a reality.  Nearly 13 years ago, Bebe the dog came and joined our young but growing family.

Bebe came from a small dog rescue who had it turn saved her from a kill shelter in West Virginia.  In our first meeting with Bebe she was bulldozing over all the other dogs as she ran around.  She was borderline in size to what the rescue group would save but fortunately did.  Her name was inspired from one of my wife's co-workers, a slight woman who wore leather pants, smoked pencil thin cigarettes and called everyone "Bebe" in an Omar Sharif way.  For some reason it stuck which was strange as she had a funny look about her coupled with a snaggle tooth. 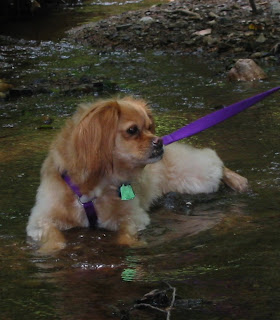 We had decided to adopt an adult dog while still living in an apartment.  A safe move when you don't know how house broken a dog is.  Getting a puppy seemed like a lot of work when both of us worked, so an adult dog made more sense.  Our fears were soon put to rest as Bebe moved in.  She rarely had accidents and got along with our 3 other cats we had adopted whilst living in Arizona. We never really did know how old she was and best guess placed her at around 15-16 before her passing.

Bebe was a extremely  laid back dog with an easy going temperament and spent many a day laying upside down on the sofa.  Just like in the TV show's, 'Its me or the Dog', I got into a lot of trouble for showing Bebe plenty of attention.  However, with successful training I managed to redistribute my time evenly between all the pets but made sure my wife got the lion's share. 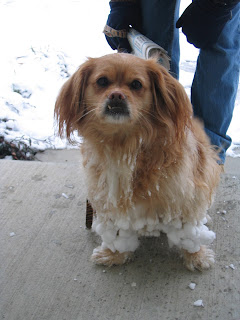 As life progressed we added another two kittens to our furry herd and later two children.  All through this Bebe remained patient and tolerant to all the changes.  Even when my children would chase her around, she would be gentle, only resulting in a bark or small nip when the playing got a little rough.  She had a liking to the children's Crayons which were always being left out.  Of course the surprize of picking up dog poo with what looked like rainbow sprinkles mixed in was a giveaway to her crimes.  We did finally managed to buy a house with a good sized garden that she enjoyed patrolling.  It goes without saying that we decided to lay her to rest in the back garden that she guarded so well from the rabbits and squirrels.


As age ticked by she developed cloudy eyes and would miss the local wildlife infringing on the garden.  Also gone was her hearing, probably a result of having two noisy children.  Her face took on that white shadowing you often see in old dogs and her walks were reduced to just short runs around the neighborhood.  I found the walks to be valuable in clearing my head.  It was almost meditative.   For example, whilst working on finishing our basement, I would often come up with solutions to problems as she dragged me around the block.  I'm sure the worlds problems could be fixed if everyone found time to take a dog on a long walk. 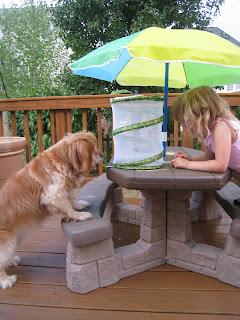 Now our time has come to part ways.  My faithful pal, gardening bud and 'thinking' dog is on her way to doggy heaven.  She has made me a better person by making me step back and think whilst we walked everywhere.  Though the common saying is 'rest in peace' I believe shes had enough of that.  Hopefully she has found her legs again and is raising cane, chasing squirrels up in heaven.