Without any doubt, Crape Myrtles are the south's most beloved flowering tree.  Their frequency of use in south gardens is only paralleled to lilacs and Crab apples found in just as many northern gardens.  Renowned as a 'tough as old boots' tree for difficult and dry sites, there's not much that will slow it down. 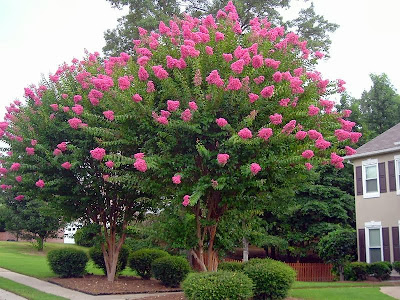 However, this year we've received more phone calls than normal about Crape Myrtles failing to put on there dramatic display of blooms which we have become accustomed too.  Such an unusual occurrence prompted myself to delve into this phenomenon and investigated why the normally flamboyantly flowering tree has become shy.

Below is a list of top ten reasons why your Crape Myrtle has become impotent.  The good news however is, with a few changes you can bring the flowers out of hiding and get the show on the road again.  Here are my top tips to shower your garden with Crape Myrtle blooms once again.

1. Flowering only occurs on the current years new growth.  Look to see how much growth your Crape Myrtle has put out in spring.  If it appears stunted than a good feeding of fertilizer from late winter to early spring will promote a good flush of new growth ready to set flower. 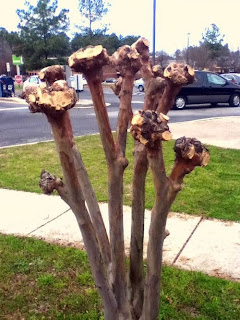 2. Heavily pruning your trees DOESN'T increase your flowers. The myth of whacking down your tree to its trunks doesn't promote a flood of flowers come summer.  Instead, most of your trees energy will go back  into regenerating those lost limbs. Prune to maintain a good framework of branches and thin down the small twiggy growth.  That's all you'll need to do to promote the right growth to set blooms.

3. Crapes like sun!  If your tree is receiving less than 8 hours then expect to see less blooms than those out in full blazing sun.  The more the better!

4. Wild fluctuations in temperatures during spring can play havoc on when your Crape breaks dormancy. Some varieties are known to produce early buds, which if hit by a late frost will set them back a few more weeks.  Alternately, extended summer heat increases your bloom time greatly.  Crapes are native to Asia and love to bask in the sun and cook in the heat.  Haven't you ever wondered why those trees growing in parking lots look so amazing.  Its all to do with radiant heat baby!

5. Not all Crapes are the same.  You can't look at your neighbors tree in full bloom, and compare it with your own as chances are there not the same cultivar.  Some of the smaller, compact types are the last to flower.  For example, 'Pocomoke' won't bloom until we get into mid to late August.

6. Crapes can be subject to a few pest and disease problems.  Heavy outbreaks of any issue will stress a tree to delay or prevent flowering.  Major signs of problems include black sooty mold covering the leaves from honeydew, the excreted sap of aphids or white coating extending from the leaves to flower buds from powdery mildew. A common leaf spot disease called 'Cercospora', brought on by warm, wet summers will cause your tree to prematurely shed most of its foliage, weakening its ability to flower. The nemesis of Crape Myrtle flowers are Japanese Beetles, which munch through the flower buds like they were candy. Be watchful of these issues and deal with them before they get the better of your tree. 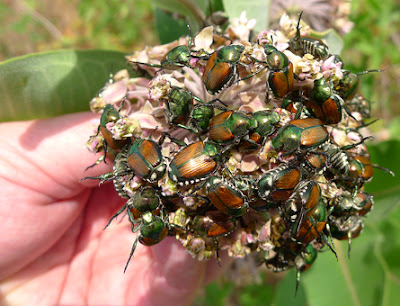 7.  Excessively high amounts of nitrogen from fertilizers can knock out the trees ability to set flower. The roots from a Crape can spread fairly wide and spread under your lawn.  If you strive for a nice carpet of emerald green grass for a lawn, you might be effecting your trees ability to set flowers.  A soil test will also indicate if your soil has a good balance of phosphorus and potassium needed to produce flowers.

8. Too much water will flood your tree with new growth, knocking out the need to flower. A plants survival instinct is to set seed so that its genetics can be saved through its offspring.  If the Crape doesn't feel stressed then it won't have a desire to flower and reproduce. Summers with ample rainfall, irrigation systems or heavy, poorly drained soil only compound this problem.

9. In rare occasions, drought conditions will also affect your Crape's blooms. When conditions become tough, a plant will switch to life support, minimizing its activities to stay alive. Flowering is considered a luxury and is often the first thing a crape will drop. Newly planted Crape will often suffer from this as their roots wouldn't of ventured far into the soil at this point. A good, deep penetrating soaking is often all that is needed to turn them around. However, once the hot, dry weather breaks there is often ample time to see some blooms appear in late summer. 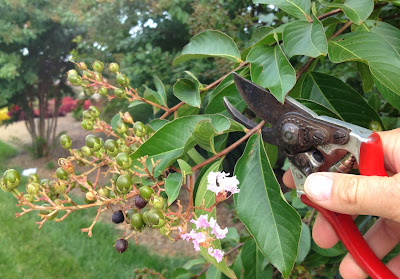 10. Just like roses, when a Crape goes to seed it will stop flowering.  To encourage a new flush of flowers, simply snip off those pods and return the energy back into flower production.  For a plant to produce seed to requires a tremendous amount of energy from the plant, sacrificing flowering and vegetative growth produce the next generation. 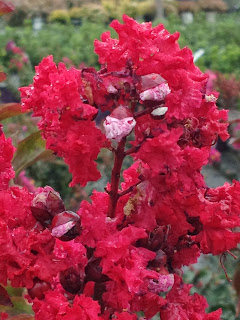 Another strange flowering quirk that doesn't have anything to do with lack of flowers but instead relates to blossom color has to do with two of the best red flowering varieties, 'Dynamite' and 'Red Rocket'.  When the flower buds begins to open you'll notice that the flower is white, only turning red after 10 - 15 minutes in the sun.   However, if this blossom begins to open in the shade it will never turn to the rich red you thought it would.  Drought conditions can also play havoc with the color too.  Low sap levels brought on by droughts don't flush the petals with color quick enough in that short window needed.  Heat on the other hand will intensify the pigment in the petals, bring out the best reds.  Best advice is to not let your 'Red Capes' struggle for water when they flower and always plant in the sunniest spot you can find.

In gardening, there are always forces beyond our control that affect how plants will grow and preform.  There's no point fighting these forces as not every year will be the same, so the results won't be the same either.  As long as the basics are covered then the rest is just surrendering yourself to what mother nature will give us to enjoy.  You either go with the flow or swim against the current.  For me, float down the river is far less effort and you get to enjoy the finer things in life.

Gardening after all is the study of patience.

Posted by Robert Woodman at 5:50 PM