If ever such a professional title as a mulchologist existed, then last year I came pretty close to earning that accolade.  I hadn't given too much thought to the stuff until I was faced with some peculiar questions about are wood based mulches.  In fact, the more I dug into the world of shredded or chipped mulch the more I realized that it might be more foe than friend.

My training began early in 2013 as many landscapers and homeowners were breaking out of snow-mode and venturing back into the garden.  There's nothing better than cleaning up the remnants of last years fallen leaves or cutting back the odd ornamental grass to get us into the gardening mood again.  What better time to lay down that fresh carpet of mulch before all those perennials break through the ground.  Although not my favorite of mulch coverings, color dyed mulch has become very popular.  Black, brown or martian red, we sell enough scoops to probably pave the Washington DC Beltway (slight exaggeration).

However, little did I know, you have to make sure that you have at least one dry day after applying the stuff or you run the risk of rain washing off the color.  So great is the demand for this colorful carpet, it is processed without time to properly cure.  Nothing is worse than waking up the following day after spreading it to discover your lava field of red mulch looks more like fresh milled chips spat out from an arborist's tree shredder.

For suppliers of mulch, one thing they have to watch out for is souring.  The large piles of wood mulch stored for long periods over the winter, or bagged mulch that remains too wet can undergo anaerobic fermentation.  This process converts organic matter into sulfides, acetic acid, ethanol and methanol, basically it becomes wood alcohol.  If not properly processed, this 'Moonshine mulch' releases gases that are toxic to plants, bleaching or scorching the foliage of surrounding plants and even running off into your lawn.  For some plants this can be detrimental, but woody plants will regrow any lost foliage once the hangover has pasted.  A quick sniff of the mulch, checking for an alcohol-like, vinegar or rotten eggs odor should alert to a potential problem before you spread it out. 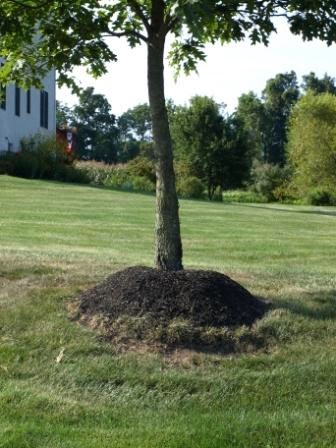 We all know the virtues of mulching to control weeds and reduce moisture loss but it can be over done.  Excessive mulch will suffocate the soil and provide cover of rodents like my personal nemesis, the veracious vole, who likes nothing better than to chew off the roots of my plants undetected.  Long have we been told to not mound up mulch around trees, creating a volcano but it is still seen around our neighborhoods.

Lesser known but equally as damaging, is constantly re-applying mulch in annual layers.  Many of us don't realize the need to break up and aerate the crust that mulch can form throughout the year.  When shredded wood mulch is applied to thick and allowed to dry out, it becomes a breeding ground for certain kinds of water-repelling fungus.  This Fungus produces a mycelium mat, similar to roots of a plant, that becomes so dense it repels water.  The technical term is 'Hydrophobic', but this effect prevents moisture penetrating down to the soil, starving the roots of water.


Many microorganism live in and around mulch.  Some are beneficial to our gardens like mycorrhizal fungi. Others slowly break down and mineralize the mulch material, releasing nutrients that benefit the surrounding plants. However, some microorganisms can become a nuisance and become detrimental in our gardens. Who hasn't suffered from Tar spots on your siding or covering your car, fired from artillery fungus. And, what about those phallic toadstools from stink horns, aptly named for the stench they give off too. Nothing beats the slime molds. Commonly referred to as Dog Vomit Fungus as it looks just like its named! Wood based mulch is an ideal media for fungus establishment and if measures aren't taken to remove these annoying organisms, then the chances are great that they will re-inoculate fresh mulch after its applied.

These problems are just a glimpse into a bigger a debate about wood mulches dirty little secret.  I have been scarred by Artillery fungus's Tar Spot bombs and lost many plants from tunneling voles.  Gone is the desire to spread yet another 10+ yards of shredded wood mulch each and every year.  I confess, I'm cheap, but is there a better alternative?  Well according to Ohio State University Associate Professor of Agricultural Research and Development, Dr Dan Herms, the answer is compost!

In a study comparing ground or shredded wood mulch and composted yard waste it was found that the low Carbon to Nitrogen ratio of compost produced better plant growth and increased productivity.  The finding are too long to cover in this post, but isn't compost what we used to do before it became popular to buy shredded mulch?  It was only since the 70's that sawmills began removing the bark from logs in an effort to extend a saw blades lifespan.  Within a few years of that, nurserymen and landscapers were buying up all the waste from mills as an easy way to dress up our gardens.  Are we now beginning to discover some of the negative effects from this product.

While I'd agree mulch is more aesthetically pleasing to look at, like icing on the cake, I would welcome something that improves the well being of my garden.  Gone for me are the days of bagging up grass clippings and fallen leaves for the trash truck.  For the past year I have been spreading my garden waste directly onto the beds and allowing those microbes to go to town on it.  Although the conventional wisdom tells me to process this material first, I've seen no negative effects on my plants. 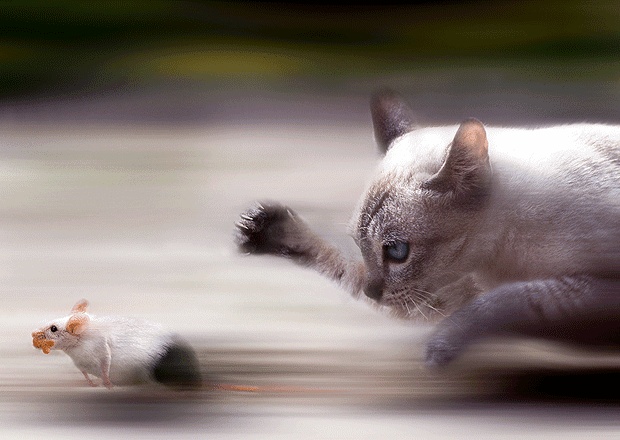 One unexpected benefit I've recently seen is that neighborhood cats have been able to easily hunt down the voles.  It seems that these supreme hunters can seek out and attack subterranean voles better in compost than compacted mulch.  This is enough reason for me to continue using compost to mulch with but I suspect I will need to find more material to feed my gardens needs.  I'll have to keep an eye open for more curb side garden waste to use and recycle.  Someones trash will become my treasure!

Read more here, but don't forget to come back!

Posted by Robert Woodman at 6:08 AM