The hunt for the Holy grail of Trees - Davidia involucrata

Warning! I'm afraid this is a long one, but I promise if you stick with it, you'll enjoy this as much I did writing it.

'How many garden lovers ever pause to think of the means whereby their gardens became endowed with multifarious variety from distant lands and climes; of all the time and money expended in the quest, and of the toll paid in human energy and life?  Could the denizens of our gardens give speech their story would be more engrossing and more romantic than that told or conceived by authors of the "best sellers".  All who love a tree give heed for a little while and learn how gardens came into possession of one of the most beautiful and most remarkable of all trees.'  Ernest Wilson, Aristocrats of the Garden, 1926.


What better way to start this post than quoting the words of the explorer who was charged with the mission of collecting and introducing into cultivation, the seeds of Davidia involucrata, the dove tree.  Anyone who has seen this tree in flower will no doubt agree with the sentiments expressed.  This post is a departure from the standard description of the plant in question, often written in books or websites, but rather the story of it's becoming and the people associated with it. 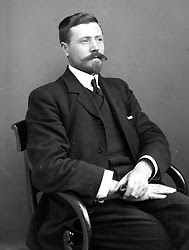 Ernest Wilson was one of the great plant explorers in what is referred to as the golden age of plant hunting (mid 1800 to early 1900).  His name is often associated with other botanical heavy-weights like Menzies, Hooker, Fortune, Farrer and Douglas to name but a few, as well as with the botanical names of plants.  These collectors often risked their lives collecting plants in remote countries for very little financial reward.  I came to learn about Wilson from my time at the Royal Botanic Gardens, Kew in England where he once worked before being recruited by James Veitch & Sons, the largest family-run plant nurseries in Europe.  In 1899, Wilson signed a three-year commitment to head an expedition to China. The Veitch family was clear in its orders, "stick to the one thing you are after and don't spend time or money wondering around!"

The first leg of his journey started in Boston, where he visited the Arnold Arboretum for the first time to study techniques for shipping seeds and plants successfully, needing this information to keep them alive for the long sea voyage back to Veitch Nurseries in England. Charles Sargent, the 'Keeper' of the Arboretum, recommended Wilson track down Dr. Augustine Henry, another prolific collector of that time, who had seen the elusive Dove tree in the wild, and could furnish him with the location.  The only other person who knew where this tree was, was honored in the name of the tree, and had died in 1900, father Armand David.

After sailing from San Francisco for Hong Kong, the next year was spent in pursuit of Dr. Henry. I found it strange to read about his long trek through northern Vietnam (French Tonkin) and back into Yunnan, China to reach the capitol city of Szemao near the border of Myanmar, just to meet someone.  We take the ease of communication for granted, because in today's world we can give and receive information at the blink of an eye.  Back then it was a major ordeal.  Wilson had to overcome a lack of English speaking porters, Bubonic Plague outbreaks and being held up for weeks in frontier towns because civil unrest made it too dangerous to travel.  He was even suspected of spying for the British Army due to his prolonged inability to travel through Vietnam.

When he did manage to travel up the Red River the reports of civil unrest were evident.  Official buildings were burnt to the ground, people murdered and the decapitated heads of the ringleaders were hung in wooden cages from trees.  There was great resentment and suspicion towards foreigners due to the French occupation of Vietnam at that time.  The Commissioner of Customs in Mengtsze, an American, helped assist Wilson in arranging a mule train to trek the final leg of the journey, a seventeen day trip on a road frequented by bandits.

Wilson did manage to overcome all the obstacles he faced and made contact with Dr. Henry.  He obtained the information on the supposed location of the Dove tree, but there was a problem.  Henry had completed that expedition 12 years prior, the map was hand sketched and only one tree had been found during that six month expedition.  Oh, did I mention it was in an area the size of New York State.  The proverbial 'needle in a hay stack'.

The return trip to Hong Kong completed his first year of the expedition.  He was able to send a sizable collection of plants and seeds he had gathered on his travels, to and from Yunnan, back to the Veitch Nursery in England.  His next destination was Ichang, on the banks of the Yangtze, where he would be based for the next two years.  He purchased a boat and provisions and wasted no time in setting out for his goal of finding the Dove tree.  This part of the journey, unfortunately proves to be as dangerous as the first leg.  Rapids had run his boat up on rocks at least twice leading to repairs, while traveling through sparsely populated highlands could of been disastrous should the boat sink or if he fallen ill.

When he reached Patung, the head official begged Wilson to turn back and abandon his expedition, a situation that would of put off anyone searching for what could be a lone tree in a vast area.but to no effect.  Rioting a couple of years back in the region between anti-Christan and Christian villagers had left hundreds dead and many villages burned to the ground. A roman Catholic priest had even been brutally murdered and mutilated during the violence. Now, two years later, bitterness and hate still resonated around the region.

Finally, Wilson reached the hamlet of Ma-huang-po and the house where Dr. Henry stayed when he found the Dove tree.  The people of the property remembered the visit and furthermore, remembered the tree.  With high spirits, the villagers lead the party on a two-hour hike to a rather new looking house.  Near by, was to their dismay the stump of Henry's Dove tree!  Cut down just a year before to construct the beams and posts of the house.

Close to being defeated, Wilson returned to Ichang to regroup, this time with a plan to head to the original location, a thousand miles west to where Father Armand David first discovered the Dove tree in 1869.  This time lady luck was on Wilson's side, as five days into the trip his party found the elusive Dove tree.  Further scouting uncovered ten more trees in a one hundred mile radius and all eleven were then watched carefully until they fruited.  Seeds were instantly dispatched to England until 1902 when Wilson returned to England and the Veitch Nursery.  To Wilson's dismay, none of the seeds had germinated and grave fears loomed about the failure of the expedition.   However, this panic didn't last long, the first seedling poked its head up out of the soil and by the time the last one emerged, Veitch Nurseries was sitting on a crop of thirteen thousand trees, nearly a 100% success rate. 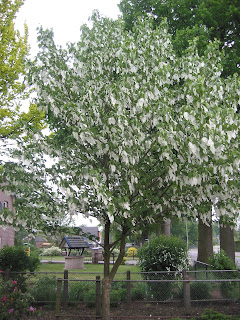 After all that hard work, Wilson realized he wasn't the first to introduce the Davidii tree into cultivation.  In 1897, a Roman Catholic Missionary in China had sent seeds to Monsieur Maurice de Vilmorin in France, and in 1898 one seedling was raised.  From that, 3 others were propagated from cuttings and one each sent to Kew Gardens and the Arnold Arboretum, both places Wilson had been connected too.  If knowing that fact, would Wilson have been so ambitious to travel through areas that proved deadly for foreigners?  I guess we'll never know.

The story of the Dove tree had captivated me, so when I discovered stock of this tree being sold through Monrovia's nursery in Oregon, I jumped at the chance to bring it in.  My discovery is no where near the magnitude of Wilson's epic conquest, but seeing it arrive completed a dream to have one for my garden.  Somehow, the final price of $49.99 doesn't seem like an amount worthy of putting on such a great tree, but who am I to say?!

Posted by Robert Woodman at 4:21 AM