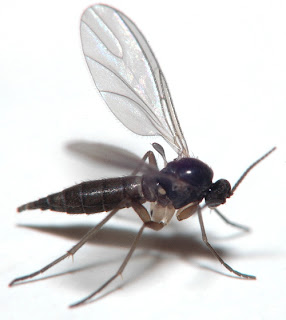 Around this time of year, a steady stream of people come to garden centers all reporting the same problem.  Small annoying flies keep appearing around the base of their beloved house plants and no matter what they do, they can't seem to stop the swarm from appearing.  Fear not, I'm here to help, for you my friend have 'FUNGUS GNATS'!!!!!

In reality, this is actually a fairly common problem.  However the thought of having small, mosquito like flies buzzing around your house isn't to appealing.   Like any pest, these harmless looking flies can begin to effect your plant and could spread to others near by if left alone.  A little work now to control the problem will prevent it from becoming out of hand later.

Anyone who works with plants will be fairly familiar with fungus gnats already. Apart from houseplants, they can be a problem when trying to grow seedlings or root cuttings.  However, the flies aren't the cause of issues. Instead, the culprit is the larval stage of the fly.  They feed on the organic matter in the growing media as well as algae and fungus that is also growing in the same mix.  These larvae can also cause damage by feeding also on the tender young roots of the plant growing in the container, and this damage provides opportunities for diseases to invade.  The actual flying adult gnats can be 'vectors' to transmit diseases from one plant to another, carrying spores of the pathogen as they travel around different plants looking for a place to lay eggs.  Commonly, these disease can cause root rot, but some can also cause foliage damage. 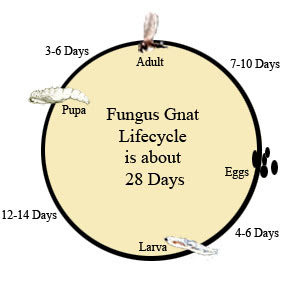 Fungus gnat larvae commonly live in the top 2 to 3 inches of the growing media around your plant.  The larval stage grows rapidly, maturing in two to three weeks before transforming into the fly that you see.  Fortunately, the adults are weak fliers and will only travel short distances in erratic patterns.  In the case of house plants, they won't travel much past the vicinity of the plant they hatch out of, unless other plants are close by.  Most adult flies will only live up to 10 days but during this period can lay up to 200 eggs into the growing media where they came from, allowing the population to boom.


The reason you see a peak in the population of fungus gnat during the late fall and winter period is due to several factors:

What can be done?

Changing the way we take care of the plant will effect how the gnat can build up its population.  Replacing the top half inch of compost with sterile coarse sand will prevent the adult flies from laying eggs in the soil.  In addition, re-potting your plant yearly will reduce any broken down growing media that creates a food source and habitat for the larvae.

around the base of your plants is a effective way to monitor activity of fungus gnats and alert you to an potential problem.  The traps are sheets of yellow plastic that attract the flies who then get stuck to an adhesive coating on the card.  Though good for monitoring it also helps trap the adult population from returning to the plant to lay more eggs.  Some websites and books also recommend placing wedges of potatoes around the base of the plant so that the larvae are attracted to it as a food source.   You simply pick up the wedge from time to time to see if there is any larvae feeding on it, just remember to throw them out before they begin to rot!

Trapping is a great, organic way to remove the adult population before they lay more eggs back into the growing media.  Yellow sticky traps, as mentioned above work well, but shallow containers with either Apple Cider Vinegar or White Wine also do well.  As the vinegar or wine ferment, the adults are drawn to the sweet smell and fall into the liquid and drown.  An added bonus is that vinegar is a natural deodorizer and will rid the air of gnats and smells alike.  As for the wine, gnats aren't fussy, so a cheap bottle is recommended unless you want to enjoy a glass yourself.  Just make sure you use containers that can't be confused with some you might drink from.

However, if you're like me, using sticky traps may have draw backs if you have pets.  Curious cats or inquisitive dogs often discover just how sticky the traps really are.  Don't fret, nature has given us many organic controls that we can use to attack the enemy.  Bacillus thuringiensis israelensis (BTI) is a naturally occurring bacteria successfully used in controlling Mosquitos

, but has also proven very effective against fungus gnat larvae too.  Safe to use and harmless to other living things, it's as simple as sprinkling it on the soil surface every couple of days and watering to dissolve it into the media.  Gnatrol

is the only BTI product labeled for use in controlling fungus gnats and several applications will be needed to control eggs and larvae, just follow the package for instructions.


Another successful method is using beneficial nematodes, a predatory worm so small that you can't see it with the naked eye.  The most commonly used for fly larvae control is Steinernema feltiae

that actually enter the larvae and release a bacterium, lethal to the larvae.  Again, safe to use and harmless to other living things, they are just mixed with water and watered around the plant.  Since both of these controls are living organisms it is unlikely to find them on the shelves of  most garden suppliers unless at the beginning of the growing season.  However, they are both available through mail order.

Sometimes chemical control is deemed necessary and  though caution is recommended there are products approved for use inside a home.  The most effective are systemic insecticides that contain imidacloprid

that also contain fertilizers.  This will deal with the larval stage but not the adult flies.  Several applications of pyrethroid

based sprays should finish off what's left of your unwanted house guests.

Many of these controls will also help deal with other creepy crawlies that may look at your house plants as a home.  Always follow packaging recommendations as to how to handle and apply them safely and effectively.  With a few simple steps you can rid your house plants of those annoying pesky flies and finally be able to invite company over for afternoon tea!

Posted by Robert Woodman at 4:09 PM