What happened to gardening?

Why do we garden?  It's a reasonable question to ask and it seems that many have.  Tongues have been wagging recently around the internet asking the same question, with many providing answers too.  But gardening for a past time has slipped into a downward spiral, maybe a reflection of the current economy or maybe just a sign of the times.  It appears that the message of why we garden maybe clouded that its lost its relevancy in this day and age.

Just the other day I caught a commercial on TV for Ty Pennington's Home and Remodeling show at the local expo center.  Home and Remodeling?  It used to be called Home and Garden show!  It appears that even Ty Pennington has turned his back on the whole gardening industry.  I seem to remember some pretty good gardens being installed when the show was in its infancy, until they did away with a garden designer in favor of highly emotional interior designers.  Seeing grown men cry makes better TV I'm sure!

I know I'm ragging on Ty for something that probably out of his hands but, gardening doesn't carry the same glamour anymore as reflected in a trade publication, 'Grower Talks'.  They recently published an article called 'Why doesn't she garden?', highlighting a survey carried out by an industry giant, Ball Horticultural Company.  The survey was to discover why the common gardening demographic, 'the white 40 or so female', has decided not to garden.  This was backed up by numbers from the National Gardening Association, that produced data showing gardening had dropped from 41% to 29% in the past 6 years.  Scary stuff.

But who out there is promoting gardening anymore?  Television has turned its back on us gardening folk as I've written about before in  'The other garden makeover' post.  I was brought up in a society where parents and grandparents all gardened and passed the knowledge on.  Schools had gardening clubs and every Friday night, 'Gardeners World' (for those in the UK) came on and exposed us to the joys of gardening.  There was even an after school children's show called 'Blue Peter' that had the presenters working in the studio's garden under the direction of the head gardener.  How does the younger generation these day get introduced into gardening when so many of the resources that we relied on have gone?

Of course the demographic is very restricted to just white females being the core customer. It fails to take into consideration males or any of the vast ethnic groups that live in this great land.  Still this is a troubling trend that we in the industry need have to change.  The big question is how do we change peoples perspective on gardening and encourage them back into their yards?

Any thoughts? Write and leave your comments, maybe we can start a growing revolution! 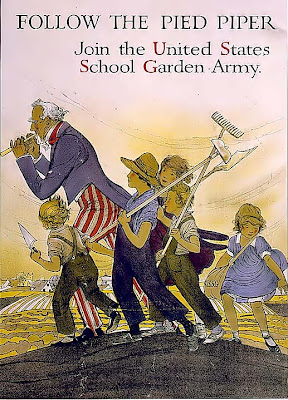