Figs - The Sexiest most Unsexy Fruit in the World 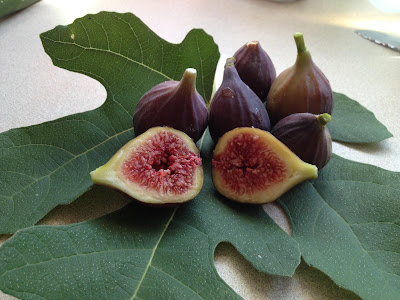 What fruit do you consider has all the taste of summer? You know, the kind that overwhelms your taste buds with its sweet nectar's richness that you can almost taste the warmth of the sun. Of course many will say Peaches, Nectarines and possible Raspberries, but the lonely fig sits outside of the popular circle like the new kid in school, looking to find its seat at a lunch table. Well my friends, this will not do and I'm here to stake its claim!

Ficus carica, or the common Fig, originate from the arid middle east and up into western Asia. Since ancient times they have been cultivated by people of this region for both its fruit and uses in ornamental plantings. Foliage from the humble fig has even found its way into the Biblical book of Genesis where Adam and Eve used the leaves to cover their naughty bits in shame after eating the fruit from the tree of knowledge. Thank God it wasn't a leaf from a poison ivy as the story might of gone in a different direction. However, as religion grew across Europe, Fig leaves became increasingly used as a form of primitive pixelation. In fact, many pieces of art were modified with fig leaves added to reduce the amount of nudity on display, even after they were created.

Unfortunately for figs they aren't the most attractive of fruits around. They don't have the rich color that mouth watering peaches do,  taking on a purplish brown skin tone.  Even the shape of the fruit hanging from the branches is said to resembles a man's scrotum. It's no surprise then to learn that this appearance has lead to the Fig being used for all kinds of sexual treatments. According to some websites, a diet rich in Figs will give you the sexual appetite of Ron Jeremy, but be careful, fruits full of edible seeds are said to make you into a very fertile partner. 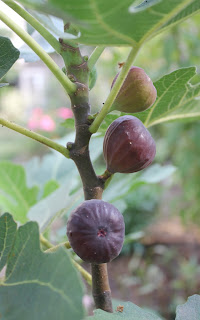 Virginia may seem to be a long way from the hot arid homelands of the middle east, but some varieties have proven to do well in our variable climate. Thomas Jefferson was known to be fond this plant as well as overs from the Mediterranean and grew them very well at his Monticello Estate.  I was even excited to read online that a nearby farm in Virginia, Ticonderoga Farms in Chantilly has been pioneering their use in agriculture for the last 20 years and has mature groves of some 400 plus Fig trees.  When compared to other powerhouse fruits like Blueberries and Strawberries, Figs come loaded with calcium, phosphorous, potassium, beta-carotene, vitamin C as well as other beneficial nutrients making them a top pick.

Most of  the varieties recommended for our northern climate will mature into 10 ft shrubs with equal spread. The dark green fingered foliage provide an excellent backdrop for other plants and introduce a exotic flare when used in a mixed border. Known to be exceptionally trouble free and extremely drought tolerant their only weakness is towards temperatures that dip below those found in zone 7.  There only other requirements is for a site in full sun and well drained soil.  They loved to be basked in the sun so only location that provide 8 hours or more will produce the best results.  Figs will do well without the need for fertilizer but a balanced feed of 10-10-10 in early spring and again in early summer will do.  All figs are self-fertile and don't need a partner to produce fruit.

Below is my top picks on three of the most popular types we see at the garden center.

Brown Turkey - The King of cold hardy Figs in the Virginia area and the most asked for since I've worked at the nursery. I've search in vain to try and find the origin of the name and the best I can ascertain it reflects the country of Turkey, which is one of the largest areas of production next to Spain that leads the market. The large, dependable purplish-brown fruits are loaded with sweet tasting strawberry-pink flesh.

Celeste - The Fig that most others are measured against for flavor. If you ever have the chance to taste one you'll soon understand why it's referred to as a Honey or Sugar Fig. This flavor also holds well when the Fig is dried or preserved to extend their season well into the winter months. The skin is lighter that Brown Turkey but the pink flesh is very similar and is less likely to split. Celeste is second only to Brown Turkey for cold hardiness.

Chicago Hardy - If you're looking for the most cold hardy fig to grow then this is the top pick! Its history is somewhat shaky, but like the name suggests it originated from a garden in the Chicago area.  Because of the cold this Fig would die to the ground every winter ,but come spring every year it would grow back still produce fruit (roots remain hardy to 20 degrees below zero). Normally, Figs require the previous years growth to set fruit, so this rare trait makes Chicago Hardy a exciting discovery. In theory, for those limited with space you should be able to chop the plant back in early spring and still have a good yield of fruit by seasons end. In my own garden I've found the fruits to be smaller, but just as prolific than any other fig. The fruits of this variety share the same qualities as Brown Turkey, for which some people believe Chicago Hardy is a variant of. 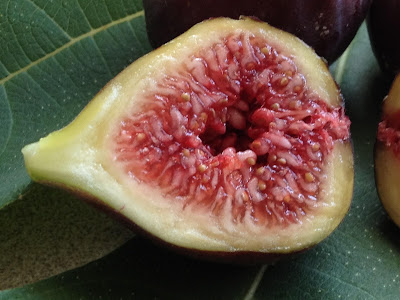 Figs are not fickle like other fruits and will faithfully bare every year.  Be prepared to be inundated with a stream of fruit when they all begin to ripen.  Sadly, they don't store very well and are best eaten fresh for the tree,but figs can be dried and stored for use well into winter.  I myself haven't gotten to that stage as the honey sweet filling is too irresistible to just have one and leave the rest. 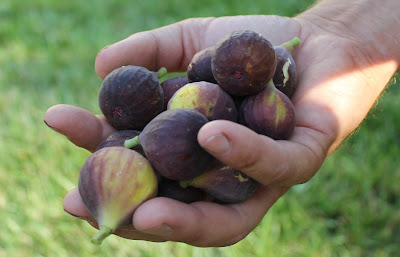 The taste of summer would be the same without Figs.  Hopefully, with this post I've won a few more hearts over to this outsider of the fruit bowl.  Viagra gave us the chemical answer to our sex life with the little purple pill, but according to some, mother nature had already given us the natural solution with this little purple fruit.

Posted by Robert Woodman at 1:17 PM