The other Gardening Makeover 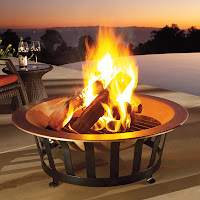 There is no doubt that the garden industry is going through a slump right now.  HGTV has dropped the G for gardening out of its program line-up, instead choosing only shows that deal with makeovers, crashers or any other connotation that makes you feel if it's as simple as rearranging furniture.  If I have to watch another fire pit, water feature or over sized gazebo, Tiki Bar or TV go into a garden I'll hang myself.  Do they really think that fire pits are great around children?!

Even in the land of gardening, meaning England, there is a concern that people are moving away from horticulture and instead taking up cooking that has largely replaced garden shows on television.  The Royal Horticultural Society ran an article recently about college programs showing a drop in numbers that I know is echoed here in North America too.

So what can be done?  How do we get the sexy back into gardening? What does it take to attract more people back to the industry again?  Its not a simple problem to fix, the whole image of gardening needs a nip/ tuck and maybe a tattoo to make it appealing.  Gardeners are seen to be of the older generation and don't come across as hip and cool, more hip replacement than anything else.  I struggled when I first chose to get into horticulture because of the image; but I was blessed to work at the Royal Botanic Garden, Kew in England that is considered to be mecca-like for gardeners.  My time there exposed me to plant collecting where I was privileged to traveled the world in search of plants making me to feel like Indiana Jones instead of weeding Rob.

Sure P.Allen Smith and Jamie Durie are rocking it the best they can but they're still no match for rock star of cooking, Anthony Bourdain once crowned a culinary assassin for his strong opinions.  Given the choice I'd rather watch Bourdains 'No Reservations' show than see another bloody fire pit going into a garden.  That man made it cool to watch a travel/food show and then talk about it amongst a group of men.  Try doing that with primroses!

If TV can make ballroom dancing cool with 'Dancing with the Stars' then surely we can reinvent gardening too.  Lets find some honest, down to earth gardeners and make a reality show about them like 'Deadlest Catch' or 'Gold Rush' and drop the poster boy presenters that only appeal to feminine types.  Men garden too and we want shows we can be proud to watch.  I want to follow the ups and downs of real gardening, the heart ache of droughts or deer attacks and the joys of harvesting the first apple, even if it is the only one left on the tree.  It worked for Kew gardens when a camera crew was based there for a year filming behind the scenes, why can't it work here?!  Changing up TV shows to appeal to the masses is just a start, but please, no more bloody fire pits!
Posted by Robert Woodman at 9:58 AM