One of my favorite trees growing up in England was the Horse-chestnut tree, Aesculus hippocastanum.  It made a large stately tree, often reaching heights of 100 ft, and very spring it puts on a show of upright panicle white flowers with blotches of red and yellow at the base of each flower.  But, as a boy I didn't care much for the flowers or even the size of the tree, it was the conkers I treasured the most.

Conkers I hear you say?  Simply put,  a conker is the large mahogany brown seed encased within the leathery, slightly spiny covering.  This seed was hunted by almost every school boy as they dropped from its tree.  I was no stranger to this harvest, often filling my pockets and school bag with fallen seeds that had broken free from its covering on impact with the ground.  Hours would be giving to select what we believed was the strongest seed to be entered in the school yard tournament of conkers!

The game pitted two people, each with a seed (or conker) dangling from a string.  One opponent would swing his conker at the others, which dangled in front of him, in hopes his would crack and destroy it.  Each person would take turns until a champion emerged.  It was a modern day Gladiator battle, flailing a ball on a chain until you conquered your opponent, but this version allowed you to return to classes without blood loss! 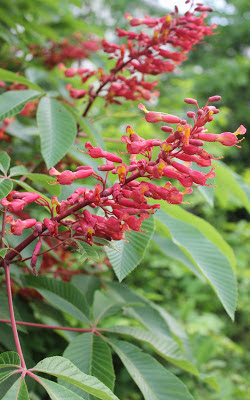 The European Horse-chestnut trees of my childhood are rarity in the Mid-atlantic.  Our summers don't favor it delicate complexities too well.  However, North America has a few of its own native Horse-chestnuts, although here they are commonly referred to as Buckeyes (for the chestnut brown eyes of a male deer or 'buck').  Red Buckeyes, Aesculus pavia are by far one of my favorites and takes pride of place in my backyard.  At this time of year it explodes with bright red blooms, that has earn it an alternative common name, the 'Firecracker Plant'.  So vibrant is the color, it draws in Ruby throated Hummingbirds that feed from the flowers after its migration from the warmer southern states.

Red Buckeyes become handsome flowering trees in the home landscape, typically growing between 10 to 20 ft tall.  They prefer moist sites, but appreciate some shade from the fierce afternoon sun.  Past flowering, Buckeye's present an interesting texture in the landscape.  The dark green palmately compound leaves give an almost tropical feel, but without feeling out of place.

Apart from its obvious attraction in the landscape, it holds other properties worth mentioning.  Early European settlers were rumored to make soap from the roots and the bark was believed to have medicinal properties.  Native Americans were known to also crush the branches to exude sap for use it fishing.  It is said to 'dope' the fish making them much easier to catch.  However, it should not confuse with edible chestnuts, (Castanea sativa), though it does share a name similarity.  Seeds from Buckeyes contain a toxin called 'Saponin', common in many plants.  Fortunately, it is not easily absorbed by us humans, but will make you feel very sorry for yourself. 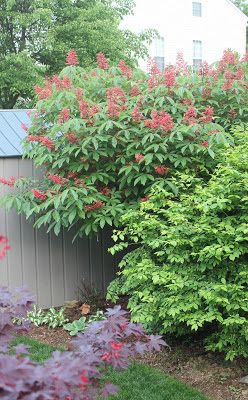 At the end of the day, it's highly unlikely that I'll ever be making soap or doping fish with my tree, but at least I know where to go if needed.  Instead, my enjoyment comes from watching my daughter discover the joys of finding the dark brown seeds that have fallen from its canopy. To see her hoard the bounty as if it was treasure, reminds me of my youth.  In years to come, I hope my children will experience the same fun I had playing conkers. First though, they'll have to learn my killer swing, often dubbed the 'Woodman Technique'  by those I conquered in the tournament of Conkers! 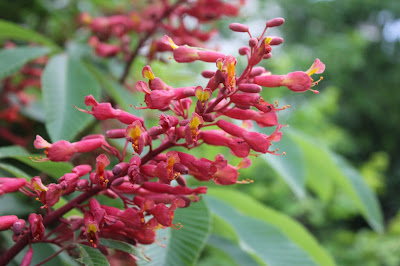 Posted by Robert Woodman at 4:20 PM