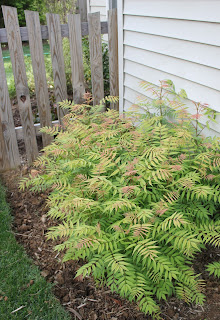 There are so many wonders to be found in Spring, its hard to keep up with what's going on around the garden.  Flowers explode from every corner of the yard and perennials push up from their winter slumber, readying themselves for their moment to shine.  However, one shrub manages to jumps out from the pack with its vivid display of foliage color that rivals any spring flowering display.  This shrub is Sorbaria sorbifolia 'Sem', or otherwise known as the Ural False Spirea.

Originating from the harsh and inhospitable Ural Mountains of Russia into Kazakhstan and other regions further west through Siberia and into Northern Asia, 'Sem's' parents come from tough stock.  The straight species is too large and unruly to be considered garden worthy until the work of a clever Dutchman brought us 'Sem' from two unnamed Sorbaria selections.  It's appearance is much shorter and greatly more compact with new growth showing bronzed highlights that is very common when compared to its parents.  Its cold tolerances, coming from such a harsh region allows us to grow it in locations as low as Zone 2.  In fact, America seem balmy in comparison. 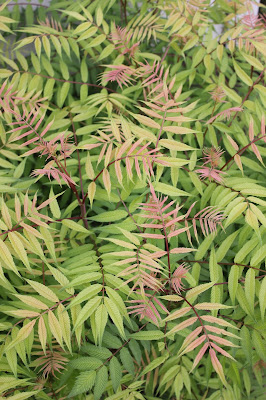 The best way to describe a Sorbaria 'Sem' is to say that it looks like a mix of Spirea, Astilbe and Mountain Ash, but wrapped up in a nice little package.   The delicate fern like foliage unfurls in spring, displaying a brilliant show of bright pinkish-red hues that persists on the shrub for weeks after.  As the seasons progress into summer, the color gradually changes to chartreuse-green with brighter tips that still show hints of red.   Creamy white flowers erupted like the plumes of an Astilbe during midsummer, set off by the now darker green foliage.

Though this shrub is a marked improvement over its parents it still has a wondering habit as it sends up suckering growth from its roots.  If you intend to let it spread and colonize, then this trait wouldn't be a problem but if you intend to shoehorn it into an already crowded boarder then be aware.  However, just like training a puppy, correcting it when it begins to misbehave and spread will lead to a desirable specimen.  Don't be afraid to hack it back in early spring to control its height or attack the suckers with a shovel.  Chopping around the shrub will manage its spread with no ill side effects.

With such a stubborn attitude to grow in the most challenging environment, its amazing not more of us flock to the garden center to buy one.  Still its lack of use in the landscape only increases it exclusivity for the true horticultural connoisseur.

Posted by Robert Woodman at 5:01 PM