It can't be denied, one of our most returned plants at the garden center happens to come from a group of Hollies commonly referred to as Japanese Hollies, or Ilex crenata.  The majority of the time we caulk up their death to improper watering, either too much or in most cases too little.  However, my suspicions have lead me to believe that something more sinister may be lurking in our soil leading to the masses of garden deaths being reported yearly. 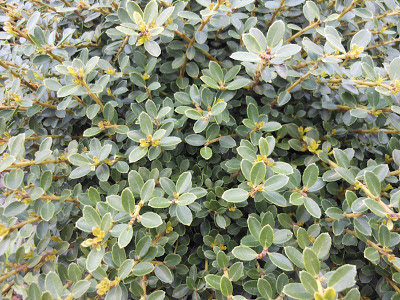 Dubbed the 'Poor Mans Boxwood' due to the low cost of purchase, Japanese hollies share similar characteristics to their more expensive lookalikes. Small, dark green leaves and compact growing nature give little clues that they are in fact different to Boxwoods. One feature that suggests you have a Japanese Holly is the presence of small reminiscent spines along the leaf edge, barely noticeable unless you run your finger on the sides of the leaf. Many cultivars exist such as Soft touch, Helleri, Compacta, Skypencil and Steeds to name just a few, and are popular with gardeners and landscapers alike. However, Japanese hollies have becoming one of the most disease prone landscape plants around.

Though my investigation I have learned that the top issue plaguing Japanese Hollies is a disease called Black Root Rot, Thielaviopsis basicloa. It is a soil borne fungal disease occurring frequently in high soil moisture areas coupled with seasonal low temperatures that attack the plants root systems. First discovered on nursery stock in North Carolina in 1977, this pathogen has made its home in the Mid-Atlantic states. What makes Black Root Rot more troubling is that it can persist in the soil for many years, even without the presents of a host. To the unsuspecting homeowner who plants anyone of these Japanese Hollies, there is no way to detect if this pathogen is lying in wait ready to strike. 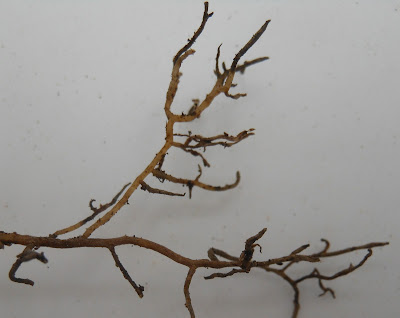 Tell-tale signs include stunted terminal growth, yellowing foliage, reduced vigor followed by die-back then death. Infected roots turn black from the tips, progressing further into the remaining root system as it spreads, choking out the ability of the plant to suck up moisture. Diseased plants decline over several months, frequently dying after periods of drought as the compromised roots cannot sustain the demand of the plant any longer. 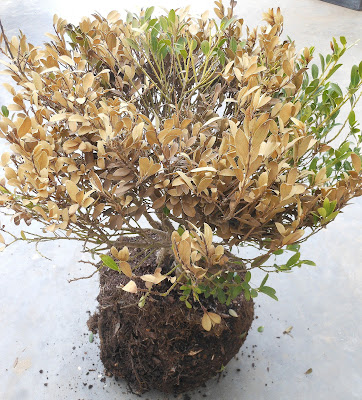 Providing your hollies with the best possible drainage and practicing good hygiene by cleaning your garden tools will greatly improve your chances of survival and reducing its spread. Also, keeping your plants happy and well watered is just as essential as drainage. Hollies that become stressed from drought can easily contract the disease as there immune system becomes compromised. As yet there is no effective chemical control to help combat this pathogen.

The good news is that there are many plants that have shown some resistance to the pathogen. Nandina's, Chinese Hollies and Boxwoods (though not English Boxwood) will all grow well in areas known to be contaminated. The irony in this Japanese Holly story is that many of us switched from using Boxwoods for the cheaper lookalikes to save a few dollars, only now to spend more in replacing them as they fall to this black death of root rot.

Holly Diseases and Their Control in the Landscape, North Carolina State University