A Garden to Die for

How far would you go to defend your garden?  I don't mean from deer or snails but from others.  A strange question for sure seeing as gardening is supposed to bring inner peace and a sense of tranquility.  Isn't gardening about getting plugged into the universe and being one with your environment?  Well as it turns out, gardening is to blame for arms race. 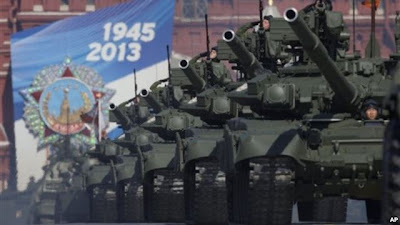 According to 'Mankind Decoded - Arms Race' a program I happen to channel surf upon on the History Channel, we humans began to develop an Arms race to protect our gardens.  The theory is that when humans changed from being nomadic hunter gathers into farmers putting down roots, we learned that we needed to protect what we grew.  Raids from rival tribes looking to take what you had often lead to bloodshed and this became a matter of survival.  At first the tools used to cultivate the land were employed as close combat weaponry.  As time progressed, weapons developed  into longer distance types like bow and arrows to reduce close contact fighting thus leaving your fight force somewhat safe from harm.  But, with the evolution of a new weapon, another was created to supersede it. Serious escalation just for the sake of a few spuds and lettuce tops!

Sadly, the human race hasn't evolved much since primitive man began sowing his first crops.  An article in the Wall Street Journal reported on a community garden in Queens, New York, that has become the battleground between two rival factions, true mob stuff.  Tensions reached fever pitch when a 75 year old man became so upset with the local authorities decision to bar him from his plot of land in the community garden that he threatening to set himself on fire.  Armed with two gas cans and lighter, San Ok Kim actions lead to having local schools placed on lockdown until a NYPD Hostage Negotiation team could subdue him. Of course how can you go against the NYPD's firepower, unless you use yourself as actual firepower!  With fights, mud throwing and even death threats becoming a daily event, the Parks Authority has stepped up patrols to curb the violence.

The story of the potential flaming man only demonstrates the extreme lengths some will go to in defence of there sustainability. The internet is full of stories from people facing down overwhelming opposition in their needs to grow there own food.  One such story that hit the internet and went viral, was of a Michigan woman who faced a 93-day jail sentence for planting a vegetable garden in her front yard.  According to her cities bureaucrats, it violated codes that requires you to have suitable plantings in your landscapes.  Of course, defining 'suitable plantings' leaves it wide open to personal interpretation, but if the White House can have a Vegetable garden on their front lawn, why can't she?  Although criminal charges were dropped because of overwhelming support for the garden, prosecutors were still look at ways to bring charges.  However, if the story was flipped and it was First Lady, Michelle Obama facing jail time for her sugar snaps, we'd soon see what capabilities are at her fingertips to defend her food source.

The cold war made America the world leader in the Arms Race, with the most superior weaponry known in battle.  But, this country's biggest threat doesn't come from bullets and bombs.  Instead, our Achilles heel might be our inability to feed ourselves.  We have become so dependant on others in foreign lands for the food we eat that we have become detached from being able to supply for ourselves.  For many, growing food from a packet of seed is like figuring out how to fly to the moon.  Crisis from food shortage will drive many back to those primitive days of taking with force.

The ability to grow food to support our nation should be a matter of national security rather than considered a criminal activity.  Regardless of where you grow vegetables, these cultivational renegades need to be embraced as Broccoli revolutionist or Potato Patriots.  The Nuclear bomb is the pinnacle to the arms race but it holds no ground against the humble carrot!  And, whoever holds the dangling carrot, leads the Mule.  As a nation, we need to ask who is holding that carrot, and who is the mule?  Just think about it!