Thinking outside of the Zone - Part Two

The subject of War and Gardening doesn't often mingle in the same discussion unless you're addressing deer or weeds.  But for this next post I wanted to use a military doctrine of 'Shock and Awe' to describe my amazement of discovering Palms flourishing in Panama Johns Northern Virginia garden.   'Shock and Awe' was coined to describe the surprise of overwhelming power that leaves you paralyze, and if jaw dropping dumbfoundedness was the result of this Shock and Awe... then I think it worked. 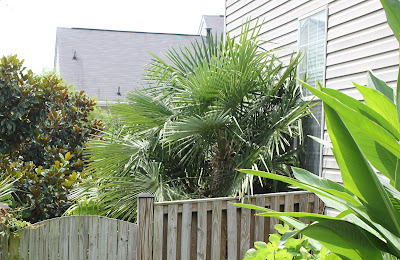 The image of coconut palms with an inviting hammock stretched between them is everyone's dream of paradise.  Though global warming hasn't made it possible for us to enjoy coconuts in the backyard just yet we do have some other options that will equally create drama!  In this second instalment of my visit to Panama John's garden in Northern Virginia ( Part One - Tree Treasures of Emeralds and Silvers ), seeing his collection of palms was what I came for.  My goal was to discover his tricks but what I learnt was that they're pretty easy plants to grow.

If like me you're thinking of growing palms, then the hardiest group to begin with would be the clumping types.  The main reason is that their growing shoot (meristematic tissue) is protected close to or below the ground.   Palms fall under the order of Monocots, plants that grow from a solitary shoot, just like grasses.  All Monocots growing points are often protected by multiple layers of leaf stocks wrapped around this shoot. Should something happen to this shoot then the plant cannot typically re-generate and often dies.  This adaptation, by keeping this shoot low or below the ground, insulated it from colder air temperatures and allows it to grow into lower hardiness zones.


The best for cold hardiness are the Needle Palms, Rhapidophyllum hystrix.  One website, www.hardiestpalms.com lists the needle palms being able to survive winter temperatures down to a bone chilling -20 F, quite a feat for a palm!  Native to the southeastern United States, the needle palm gets it name from the long porcupine like spines produced at the base of its fronds, an adaption to guard against animals that might take a fancy to a quick meal.  In fact, 'hystrix' is actually the scientific name given to categorize porcupines.  John did tell me that you can wrap the foliage, particularly if very bad weather is forecast, just to prevent the fronds from burning but they will recover in the follow spring.


Second to the needle palm for hardiness is the Dwarf Palmetto, Sabal minor.  Native to the south eastern parts of this country it can be found cultivated as far north as south-central Pennsylvania.  This is one palm well suited to our heavy Virginia clay as it prefers a wetter soil and will work as an understorey palm, taking some shade to brighter locations.  Just like the Needle Palm, the dwarf Palmetto may produce a trunk, barely reach no more than 3ft, but only after many years have past.

Clumping palms aside, what most people think of when talking about palms our the big trunked forms that grace so many southern landscapes.  Although coconut palms are still a stretch, even for the most skilled zone pusher, Chinese Windmill palms are well adapted to live in a northern town.  Out of all the palms John had, the Chinese windmill Palm, Trachycarpus fortunei, was the predominant player.  Every size grew well around his garden, from small seedlings to some impressive 8-9 ft specimens.  Their shaggy fiber covered trunks I was surprised to learn that Chinese Windmill palms, also known as Chusan Palms, grew pretty quickly and were very tolerant of droughts that so often impact our summers.


Also lurking in the backyard jungle,  I discovered a little known Kumaon Palm, Trachycarpus Takil, a native to the foothills of the Himalaya in northwestern India.  Often mislabeled or confused with Windmill palms, the Kumaon Palm has dramatically more leaf segments per frond and its trunk fibers shed off easily, revealing a bare trunk.  Because of it's geographic distribution, growing at an altitude of 5,400 to 8,200 ft, it is naturally acclimatized to survive bitterly cold and snowy conditions.  This makes it a great contender for colder locations than what the Chinese Windmill palm can withstand.  However, few places offer the Kumaon Palm for sale so little is known about its range limits in the US. For now, only enthusiasts like Panama John are testing the limits of this palm, but more needs to be done.

I can't deny that I have become smitten with the concept of growing palms in my own garden.  A dwarf Palmetto has found its way into a butterfly border in my side yard and numerous seed pots have appeared on the deck.  I walk around the garden envisioning palms sprouting up all over the yard, much like in Panama Johns garden, providing that dramatic texture.  Maybe one day I'll be able to swing on a hammock stretched under their lush canopy of pleated fronds in my own version of paradise.

Coming up in the last post in this three part series we'll explore some of the iconic leafy plants that have made their home from the tropic's in the steamy jungles of Northern Virginia.


What to read more about Zone Pushing, here's Panama John's and Boca Joe's publication through the Virginia Extension Service

Posted by Robert Woodman at 5:51 PM

Email ThisBlogThis!Share to TwitterShare to FacebookShare to Pinterest
Labels: Palms