Be careful of what you ask for

Have you ever wondered how some of these plants got there names, or been left dumbfounded by one? Whether its a common, variety or scientific name you start to wonder if it was done for humor or that all of the good ones have been used already.

One of my favorite, or is it least favorite I should say, is the Paniculed Hydrangea 'Pinky Winky'.  A nice plant with admirable traits but what male in their right mind would stroll into a garden center and ask for a 'Pinky Winky'.  Surely the marketing guys behind that one should of known that half of the demographic who shop garden centers (being men) wouldn't buy a 'Pinky Winky' even if it grew beer!  Now they got it right with Hydrangea 'Big Daddy'!

Roses can have 'tongue in cheek' names too leaving you hot under the collar and a little flustered.   'Sexy Rexy' and 'Easy does it' rely on sex appeal to get the eye.  However, rose names have also been used to memorialize famous people, 'Pope John Paul' and of course 'JFK'.  The problem arises when a rose has been name in honor of you but your not pushing up daisies yet, as seen with this years new release, 'Dick Clark'.  Does this mean that by having a rose named for you is really a curse - just a thought. 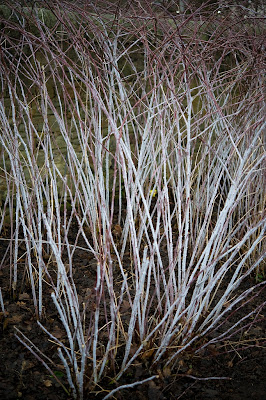 Now in the world of pure science you wouldn't think that humor enters into the logical process of descriptive naming.  Every now and then, it helps to step back and have others review your good intentions to prevent embarrassment as with the case of the white stemmed bramble, Rubus cockburnianus.  I have no problem with Rubus, but the last part gets a little tricky!  It always brings a little smile to my face when you read the 'very proper' British garden magazines recommending the virtues of planting R.cockburnianus around your garden for winter interest. Rumored to be named in honor of the Cockburn family contributions to plant exploration but instead will raise eyebrows with the title 'cockburnianus', how unfortunate. Couldn't we just use the guys first name like Rubus John for example, it doesn't have to be so literal.

Of course common names come out on top like 'Bleeding Heart' or 'Lady's in a Bath tub' for Dicentra or Corpse flower for Amorphophallus titanium, taking into account the rotting flesh aroma it puts off a when flowering.  We still need to use caution when using common names in the company of others as with the example of asking for 'Naked Ladies' (Amaryllis belladonna) .  One often doesn't  go looking for 'Mother-in-laws Tongue' too often either, a Sansevieria sp. unless you really have too.

Lastly, make sure what your asking for is actually a plant.  Too many times we've had people looking for Chlamydia!  Of course we're not that type of establishment to be offering Chlamydia as part of our services,  though one could be mistaken to think it was a Freudian slip perhaps?  In the end they tend to leave a little red faced but satisfied with a fine selection of Clematis for there garden.

Posted by Robert Woodman at 9:07 AM