I sadly learned last week that my previous employer had died after a short fight with lung cancer that I understand had come on suddenly.  His name was Frank Pearl, for whom I worked as a Head Gardener on his private estate, Chancellors Rock farm in Rappahanock County, Va.  I know more about him in his passing then a I did while working for him but I always felt that the farm was his escape from prying eyes in Washington DC, so I choose not to inquire much unless given in conversations.

I admit that I was intimidated by his presence but held a great respect for him as he was a hugely successful, multi-million dollar investor with connections far bigger than I could comprehend.  He had a cool manner about him, like a poker player that was very unnerving but when brokering deals involving sums of money equal to lottery winnings, is a quality that's very desirable.  However, I never knew if the job I did met his standards and was left guessing by his quiet nature.  Many would say that no comment was actually a good comment.

One day the cool demeanor slipped as he took me by the arm and pointed out some orange tulips that had gotten mixed up in a box of what should of been white tulips.  He found the color very offencive for a garden, reminiscent of  'life jackets' and very unnatural.  However, I finally saw an emotion from which I could benchmark my work and a point where we connected.  It didn't last long though before that connection went back to a professional level but that was a trait I'd admired and respected from him.  Orange tulips became the equalizer that day between the powerful Washington DC elite and a dirt digging British gardener. 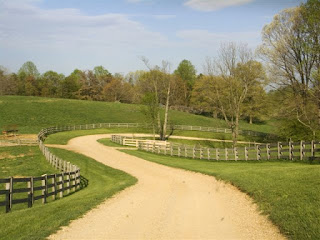 I have fond memories of my time and experiences on the farm that will be with me until I leave this place.  I can still picture him in my mind with his wife strolling up the unpaved road heading to the dining pavilion, pocket full of sweet treats for the Horses and followed by the farm dogs who have also since left us, Nudge, Lassie, Chubb and Tag.  Though he is gone his spirit will live on in those who spent time with him, for me orange tulips will bring a little smile to my face for the day I met the real Mr. Pearl.