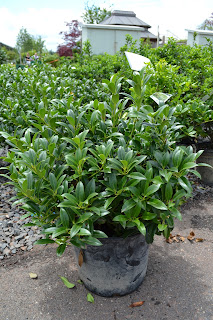 I don't often get excited over hollies, its pretty much a static plant until it produces berries so finding one that makes my eyes pop out and whistles blow is rare!  Last year I became aware of a Holly 'Cherry Bomb', released from Greenleaf Nurseries in North Carolina.  Very little information was given and web searches on the plant produced barely any thing that would tweak the average persons interest but I took a gamble and brought some in.  Unlike the lottery, this one seems to be paying off.

One of a few website I stumbled across reviewed it as 'Total Tenacious and Texas Tough' plant.  Cause for concern as it might not be tough enough for Virginia's winters.  Yeah, we kick butt too but without the big hats!  My concerns have been laid to rest this year as a planting done last fall at the front of the store not only survived the winter but showed no sign of leaf burn often seen on newly planted broadleaved evergreens.  In fact the plants has thrown out copious amounts of flowers that are developing into good berries for what promises to be a great show in the fall.  It may be good to mention here that the plants are self fruiting so no need for pairing partners by the hand (a Texas saying). 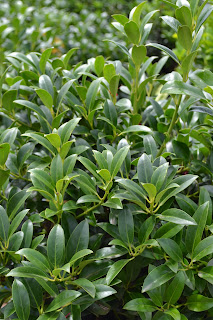 The foliage is smooth, dark green without thorns that would suggest it belongs with the holly family, almost taking on the appearance of a Otto Luyken Cherry Laurel.  According to the JC Raulstons Arboretum 'Connoisseur Plants - 2006' listing, it mentions that it was a home grown hybrid out of the National Arboretum in Washington DC.  The interesting part is when the parentage is discussed, crossed between  Ilex Nellie R. Stevens and I. intregra or Mochi tree native to Asia.  Both are somewhat large specimens in the landscape but  'Cherry bomb' is listed as reaching 3 to 4ft tall by 3ft wide and mounding, though is a slow grower.  This claim seems to be holding as none of the plants show signs of a loftier ambition. The rest of the literature gives the impression that sliced bread was the last best thing available to us before 'Cherry Bomb' showed up.  Sun-part shade, moist, well drained soils but tolerant of floods or drought, is there anything it doesn't like!

My hat comes off to this Holly, for the reason that it has gone out of its way to not look like a Holly except for its large red berries.  Even a taste test of sorts done with a colleague resulted with him mentioning how good that plant was for the following ten minutes.  I'm surprised he didn't light up a cigarette after his experience to gain his composure back.  Though one would not consider it terribly sexy, 'Cherry Bomb' does make quiet an sensation in the garden for a Holly!