Design school can only teach you so much, concept and form, elements of design, construction, you name it, they'll cover it.  However, real world experience is where formal education can come up short. Particularly, how to deal with challenging customers.

I did a nice little consult for an elderly couple who needed to replant a small triangular shaped bed in their backyard.  It was a nice, simple combination, something with height to hide a telephone terminal box, with the rest of the planting to transition down.  The plants needed to be deer resistant, and by the looks of the photo's brought in of the previous plants, somewhat easy to take care of.  Needless to say, the previous plants had been completely stripped down.  The garden backed onto a golf course, where the deer roamed freely, from garden to garden at night. 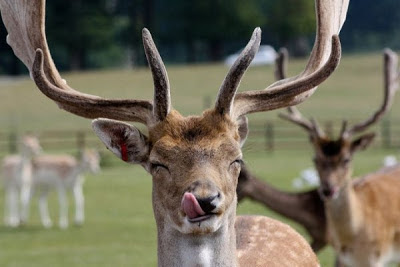 I had my suspicions that deer weren't the key cause of the plant's failure. Azalea's, being shallow rooted, don't favor a lot of sun particularly when baked dry.  Not to worry, "We have an irrigation system!"  Right, the irrigation story again.  However, I couldn't get them to agree on a single thing, beginning with what the space looked like.  The husband would say one thing, the wife would dismiss it and claim a different version.  At one point I found myself stuck between the two of them, as both told me their differing stories at the same time. I wasn't sure of who to look at, so my head switched between the two of them like a Meerkat out of it's hole watching for predators.  It became comical to watch them fight for control of the camera, tugging it from each other, and arguing over what picture was what, so they could give me a synopsis of the lay of the garden.

I had to bite my tongue when the wife mentioned that she wanted a tall straight evergreen with a pair of boxwood's either side, finished off with "fluffy shrubbery" around the base.  I wonder what was on her mind?  I'm sure if I asked the husband he would be looking for the two big, round, voluptuous evergreens in a bed that would curve down in an manner that was easy on the eyes!

It was also interesting to hear where the emphasis should be placed on the direction in which the area would be viewed   The husbands concern was of the view from the golf course side, making a point that it was next to the sixteenth hole, which is a par 3!  Not being a golfer myself, he might as well have been speaking Spanish, but I'm guessing that's where he escapes too.  The wife was obviously concerned with the aesthetics from the house.  Another divide of interests to overcome.

The mediation ended with the two opposing camps reaching a successful resolution.  In fact, they left the decision up to me, being the neutral third party with no underlying agenda.  It was smooth sailing until I helped to load their car, then heard the wife beginning to instruct him on how to plant the shrubs.  Let the battle commence, it's going to be a long drive home for someone.

Reflecting, as one does, on my afternoon in the war-zone,  I began to feel that those golden years of retirement, that you work so hard to achieve, might just be a pipe dream.  I always thought it was all about kicking back, playing golf and enjoying your two fingers of scotch every now and then.  But, in reality we need to carve out our own space, a personal sanctuary of inner peace.  Gardening can do this, provided that both partners aren't actively involved at the same time.  I know for me, when the kids are screaming the garden is a great escape.  That is until they find out where I am.  Maybe in design school, that was what they meant by 'spacial awareness'!
Posted by Robert Woodman at 2:29 AM