Gardeners are keen weather followers.  We have to be!  In spring we're watching for late frosts that could do damage to our tender plants, which admittedly we put out way too early.  Then in fall, we're glued to the weather stations to keep updated on when the first freeze is coming.  Still, I do take what I hear with a grain of salt, as too many news stations over-sensationalize what's actually going to happen.  However, today I got an email from one of my west coast nurseries that we buy plants from, to inform us that they have suspended deliveries due to the unprecedented nature of a storm coming our way.  Time to sit up and listen!


Some are listing this as the 'Perfect Storm', just over mainland North America, instead of the Atlantic Ocean!  Three weather systems combine to fuel each other into a mega-storm, with tropical storm force winds being felt 450 miles from the center.   Hurricane Sandy will merge with an early wintery system from the west, then collide with an arctic blast from the north, parking the system to churn over the northeast for days.  Computer models can't even predict the track, many showing the storm double backing and looping in on itself as it stalls over the tops of us.  The colored lines of the weatherman 's maps, showing the different tracks, as each computer comes up with a different path. After a while it begins to look more like a craft project my daughter does than a weather model. 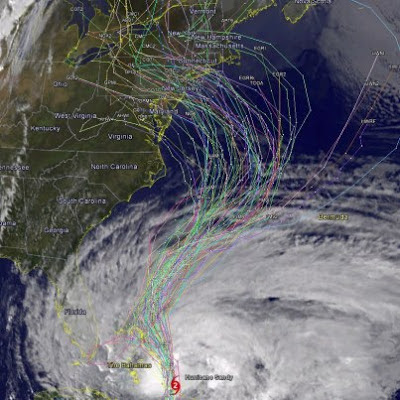 It's not the first time that a major weather event has been issued for this area. 'Snowmageddon' or 'Snowzilla', the ever hard to pronounce 'Duratio' and now 'Frankenstorm' all makes you think of movie titles.  For gardeners around here its just another hurdle we're getting ready to jump over.  Summer drought and highest ever recorded temperatures along with record lows during the winter have tested the steel of our plants and gardens.  It's a miracle that we have trees of any age still standing in our communities.  As a gardener here, I hold my head high knowing that to get anything to grow in this area is a major success.  Trying to create those gardens you see in any magazine is a Herculean task.  It doesn't matter what you might try and do to outwit mother nature, she's always going to remind you who's in charge.

This coming week, I sure will bring stories of tree loss and damage, where the only consolation I can give is one of optimism.   Instead of looking at the damage in a negative way, we should view it as mother nature's way of opening up new possibilities.  We can all get stuck in a rut of not editing out plants that maybe have been with us too long until forced to by a weather event.

From past experiences, I know some twit is going to come into the garden center at the height of the storm and want to buy a tree.   It will take several people to help hold up the trees so they can make their decision.  It's happen to me before during a lightning storm, sitting on a forklift, hauling trees to their pick-up while bolts of lightening hit the ground around me.  Oh, what we have to do in the name of customer service, but some people are just too busy to wait.  Common sense, or lack thereof, is something I like to rant about if you hadn't figured that out.

Stay safe my friends and let's look forward to sunnier days.  Our gardens always seem to bounce back regardless to what is thrown at it.  With all the alarming reports on the news, I often wonder if being a meteorologist is a gateway profession into depression!