So what does a Russian garden magazine, the Augusta National Golf club, and a golden Arborvitae have in common?  Well keep reading and I'll show you. 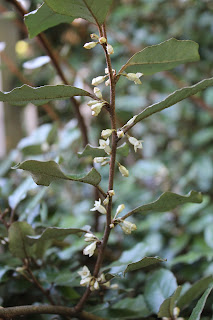 For this old faithful post, I've chosen one of my top picks for a screening evergreen.  This shrub is just bulletproof;  no major pest or disease problems, deer resistant, drought tolerant and adaptable in just about any location.  Elaeagnus pungens, AKA Silverthorn is well known in commercial landscaping, for all the reasons listed above, but is still relatively unused in domestic horticulture.  The Silverthorn gets its name from the gun metal, metallic gray coloration of the foliage.  Many variegated types exist, offering an exciting alternative to Japanese Euonymus which deer are normally known to browse down.  For myself, the fall flowering aspect is the crowning accolade, though inconspicuous, they will fill the air with a sweet aroma.

Native to Asia, this plant has gained a reputation for making itself at home in North America.  In Florida it is listed as an invasive species.  However, for us in Virginia, it is not considered a threat.  Elaeagnus angustifolia, or Russian olive, on the other hand has successfully escaped and leaped over the garden fence, beginning to invade as aggressively as crabgrass in our natural landscape.  Russian olive is a copious producer of berries that the bird devour in a feeding frenzy and has the ability to be able to lock up nitrogen in its roots, allowing it to get a foot hold in poor soils, out competing our indigenous plants.   Unfortunately,  the reputation of it's cousin has made some people weary, and to further complicate matters, the Silverthorn is often mistakenly called Russian olive, leading to confusion. 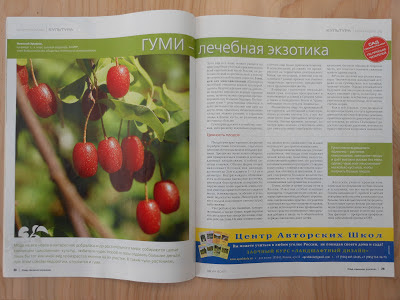 It was in a Russian garden magazine that some good friends showed me, where I first began to learn about the health benefits some Elaeagnus offer through its berries.  Though my Russian is a bit rusty, I was able to learn that the fruit of Elaeagnus multiflora, or Goumi Berry, is a great source of vitamins A and E and has the highest lycopene content of any food, even tomatoes   Sadly, our Silverthorn isn't well known for its fruit for which I have only seen a handful of being produced, but that's what keeps this species in check and stops it from running away.

For those looking for the metallic luster of its foliage, two main cultivars rival each other for the spot light.  'Ebbingei' is widely believed to be a hybrid between E.pungens x E.macrophylla but is very difficult to tell apart.  'Fruitlandii' is the commercial king of the group, with slightly larger, wavy foliage.  It was named for the now extinct nursery that introduced it into commerce, Fruitlands Nursery in Georgia.  The history of Fruitlands has dropped into obscurity over the years but it has been credited for the success of the peach industry in the south.  The owner, Prospector Berckman, a Belgian national, took over the nursery in 1858  and grew it into one of North America's most successful nurseries of that time.  Another one of his introductions that bears his name is Thuja 'Berckmans Gold', a wonderful golden oriental arborvitae.  As with most things, the business slipped away with the passing of the owner, leaving his siblings to continue for a while.  The old home still stands to this day as the clubhouse for the Augusta National Golf Club, where the rest of the nursery was remodeled into the prestigious golf course.  In fact, many of Berckman's plantings still stand around the course to this day.

Of the Variegated forms, only two seem to be popular in my area (Gilt Edge and Gold Splash), but 'Maculata' deserves a mention at the same time.  'Maculata' is an old favorite of mine that is used extensively in England. However, here on the east coast of North America I haven't discovered anyone producing it, unless you find it in a mail order nursery.  'Gilt Edge' however, does seem to be readily available from Monrovia Nurseries and is a good alternative to 'Maculata'.  The foliage has a prominent band of soft yellow around the margin of its leaves, and is much slower in growth than its parent.  Though difficult to find, 'Eleador' aka 'Gold Splash', is still my favorite, a faster growing form with varying golden coloration.  Either way, both are extremely valuable for their golden winter color that will brighten up a otherwise grey day.

Height and spread of any Silverthorn can be around 8 to10ft, but they accept heavy pruning with no complaints.  I have found that it is necessary to hack and whack at least once a year to encourage an overall fullness to it's body.  Otherwise, the long whip-like stems can make it slightly less attractive.  As mentioned before, they have no major pest or disease issues to be concerned about, and once established, don't require much aftercare. Hardy down to zone 6.

For some, this plant doesn't register high on their list of most desirable.  In fact, I have a sales rep (who will remain nameless), that regularly refers to them as 'ugly-agnus'. However, beauty is in the eye of the beholder, and to quote a line from a famous plants-woman and celebrated garden designer of her time, Gertrude Jekyll, "there is no such thing as a bad plant, just a plant used in a bad way".  I always get a kick out of discovering how one plant can be connected to so many things.  Just like a spider's web, the common thread can touch many elements at the same time.

Posted by Robert Woodman at 9:38 AM