The Department of Gardening Affairs has issued a new warning for gardeners to be on the look-out for; strange Gnome behavior.  Reports have surfaced that the inanimate non-living statues are also apparently non-dead too.  While isolated incidents have been reported, an extended warning has been issued to be on the lookout for potential outbreaks.

Do you have an outbreak?

What are the signs? 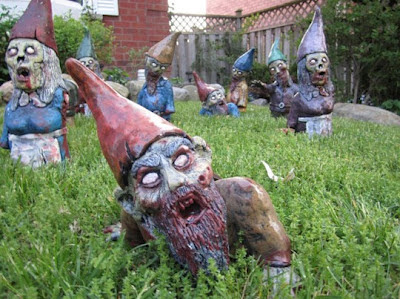 What do they feed on?
It has always been believed that zombies required human brains to maintain operational effectiveness.  However, due to their gravitationally challenged stature, they can only feed on our brain material when we lie down.  However, infected Gnomes will also feed on pink plastic Flamingos and little boy 'peeing' statues as the figurines are unable to stop the flow before being inundated by infected Gnomes.  Should you have either in your yard, we suggest raising flamingo's to a higher vantage point and stockpiling diapers for little boy statues capable of holding large amounts of fluids. What habits should we be aware of?
While Gnome populations are minimal in city landscapes, the frequency of Gnome usage increases in rural areas.  Retirement communities are known to have the highest elevated populations, so safe distance should be maintained around those communities.  Caution must also be practiced in identifying infected Gnomes from retirees living in such communities.  Symptoms can be similar between the two groups, unresponsive to communication, low growling sounds, unkempt and messy in appearance etc.  Correct identification is necessary before applying control measures listed below.

Does the change of seasons affect infected Gnomes?
Yes, cooler temperatures slow down the gnomes movement around the garden but in freezing temperatures they hibernate in dead leaf litter until warmer temperatures return. 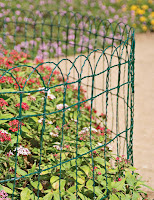 How do I protect my home from an invasion?
Increasing your homes fortification will prevent any intrusion from infected Gnomes.  Anti-Gnome fencing is being issued in high infected areas, which comes on rolls measuring 12 inches in height when placed on the ground.  This product was once mocked in the home landscape but is now hailed to prevent attacks and credited with saving live's!

The removal of the gnomes heads has shown effective in controlling the spread but removal should start at the back of the head, just below the skull as the beard has proven to deflect the incision.  Lifting of the severed head for disposal, should be done by holding the red pointy hat as the severed gnomes head will still have the ability to bite!
Should you find yourself unarmed, a large terracotta pot will restrict the Gnomes movement before a chopping implement can be found.  As a back up, super glue should always be carried to glue the Gnome in place until such time that its head can be safely removed.  Because Gnomes will often travel and congregate in packs, ride on mowers has proven effective in large scale beheading. 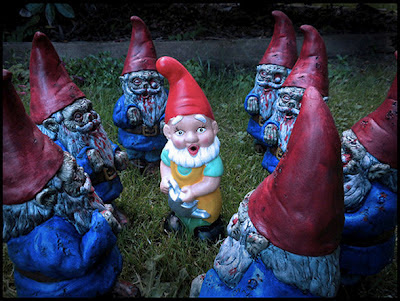 Tests are being conducted under laboratory conditions to see if the infection can mutate to infect other objects.  Early indications have shown that the disease is restricted to just Gnomes, but concerns remain that other lawn ornaments may be subjected to the same infection.


PLEASE USE CAUTION AT ALL TIMES. 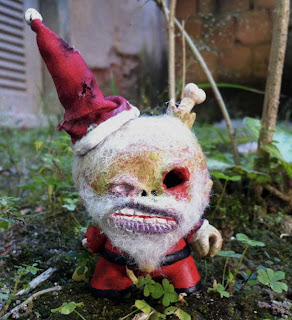 
If you like what you see and want a zombie Gnome, check out this site for more:
http://www.etsy.com/shop/ChrisandJanesPlace?page=1
or
www.huffingtonpost.com zombie-gnomes

Not all small things are gnomes, check here for more also:

http://www.vagardenerd.com/
Posted by Robert Woodman at 11:20 AM