As some of you might of noticed I have a bias towards trees and shrubs when writing posts.  Since moving to North America I have wavered in my perennial 'Jekyll 'sensibilities by the failure of many of the typically English herbaceous plants by are brutal summer heat here in Virginia. Shrubs for the most part fair better when things become grueling in the garden. I still pine for those Victorian perennial long borders made famous in gardening coffee table books, but this is just a dream.  However my passion in perennials is begin to be rekindled as I learn what plants can stand the heat of the south and thrive with little attention needed.

The Blackberry or Leopard lily, Belamcanda chinensis is a relatively unknown and under utilized perennial plant in many gardens. Housed within the Iris family it is clearly seen in the structure of the sword like foliage reminiscent of bearded iris.  However, the flowers take on the characteristics of lilies hence their common name.  Its native range is across Northern Asia from Japan into China and up to the Himalaya where it flourishes on moist fertile soil.  Having said that it is extremely adaptable to our clay soil as long as there's some drainage provided for wetter months and is hardy down to zone 5. 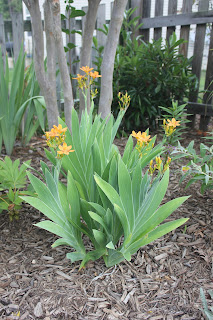 The freckled petals range from golden orange to yellow and flower from midsummer to in some areas can continue into fall when the shiny black seed-heads are produced that resemble a blackberry fruit.   Flower stalks can reach up to 3 to 4 foot in height but have read that they can become floppy, though mine seem to contradict this statement, appearing to be quiet sturdy.  Varieties do exist with shorter inflorescence but I will endeavour to save some wind fallen branches to weave around the flowers for support, if needed next year. It is a tidy clump forming perennial that slowly spreads but doesn't have ambitions to take over the garden. Old florets are replaced by new ones so there's never any need to divide the clump to reinvigorate growth unless you're looking to expand its territory elsewhere in the garden.


Also similar is the Candy Lily, Pardancanda norrisii, created by crossing the Blackberry lily with Pardantopsis dichotoma, now considered Iris dichotoma or Vesper Iris.  It took years of development but the result was not in vain as flowers pop open to a variety of different colors and patterns.  I've recently purchase one for my garden and was please to see two different patterns on the same plant, one with stripes and the other freckled.

The size of the bloom for both isn't large enough to catch the eye from afar, so you will need to mass it for effect but a flower doesn't needs to slap you in the face to be noticed.  I prefer to tuck them around to add a little spice and allow them to develop into larger colonies over time.  The bloom is rather short lived, lasting only a day, then coils itself up in an unusal manner before dropping off.  More blooms appear in succession so the limited duration of each bloom isn't a negative.  Seed can be collected and sown indoors in late winter after stratifying the seed in the refrigerator but it takes away space for the beer.  Instead I scattered the seed in late fall and have been rewarded with seedlings appearing under there own steam.

With a fan base to included such people like Thomas Jefferson who grew this perennial at Monticello during his second term as president, too yours truly, The British Gardener, shows that it must be a favorite for anyone destiny for greatness! With such a glorious review how can you deny yourself the luxury of grow it for yourself.