Now here's shrub that deserves a lot more attention than what is given. The Vitex or Chaste tree has been noted in ancient literature for over 2500 years for its medicinal uses to treat 'women things'. Hippocrates ( or Socrates from the most excellent time traveling adventures of Bill and Ted )  made mention of it for treatment of menstrual disorders but it was also used in Greek festivals to honor the goddess of Agriculture, fertility and marriage. Women would adorn themselves with flowers to indicate there chastity during the festival. 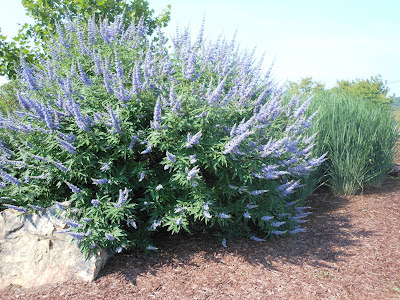 The Romans, not to be out done by the Greeks also had Vestal Virgins carrying twigs of the Vitex as a symbol of the chastity. Women would also sleep on its foliage while their men were away at war to keep themselves pure. However, if a man consumed a concoction made with Vitex it would elevate his testosterone, just what you need when heading off to war or perhaps coming home. These traditions were later adopted in Cristian rituals and still continue in some parts of Italy with 'Novitiates' or freshman monks entering a monastery, walking on the flowers and leaves to indicate there chastity. 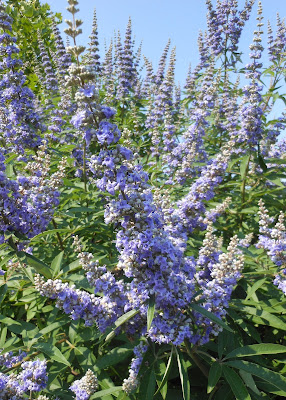 Vitex has being around for such a long time that it has developed an extensive list of common names with Chaste tree being the most freely used. Abraham's Balm, Chaste berry or Monk's pepper also come up with the latter referring to its pungent scent and reminiscent flavor of pepper for which it could be substituted for should you find that your cupboards are bare. It can be grown as a small single trunked tree but the large multi-branched form is very desirable in the landscape. Long panicles of lavender blue flowers will bloom for up to four to five weeks in June and if removed after flowering can rebloom again later but not to the same degree. Vitex is also quiet drought tolerant but grows faster and shows better when given regular watering. At maturity it can reach 15 feet but if pruned back in spring, as new growth emerges you can maintain a more reasonable size for the average garden. Full sun is a must for the best show of flowers.

So if your looking for a plant that's as tough as old boots for a hot, dry difficult spot then this might be the ticket. Don't worry, you don't have to stay pure to grow one, just show it some love every now and then to keep it happy!  Totally non heinous dude! (another Bill and Ted quote).
Posted by Robert Woodman at 6:29 PM