White Pines and the American revolution

The fourth of July will be upon us tomorrow marking America's Independence and for yet another year I get to hear all the jokes about being British in America.  Still I go on knowing that if it wasn't for the British, Americans would be speaking french, so all is not so bad.  Unfortunately I always qualify to work this holiday as 'being British' means I don't need to celebrate it although I've been naturalized or is it neutralized for five years now.  Yep, they let me in! 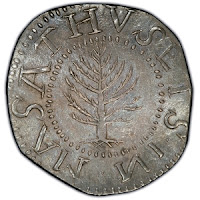 Something you'll be surprised to learn is that we never covered American history in our classes back in England, one doesn't like to loose and be reminded.  So I found interesting that the spark that ignited the revolutionary war wasn't over my nations favorite cuppa, that being  tea but instead over Eastern White Pines. Many others I spoke to, including Americans also wasn't aware of the importance of the Eastern White Pine to American history so it seem appropriate to write this piece and bring recognition to them.


One of the first flags flown in defiance of the crown had a white pine emblem as its center piece and the first illegal coin minted for tender featured a pine too, the Massachusetts Pine Tree Shilling. The Pine Tree Riot or White Pine War of 1772 was one of the first acts of rebellion turned revolutionary, more than 18 months before the Boston Tea party that moved this country towards war. Of course we think the Rattle Snake flag with the motif 'Don't tread on me' is much more masculine to rally behind but at the time the lumber trade of Pines was a major commodity.

The Eastern White pine is the tallest pine species in Eastern North America. Trees of up to 200 feet and clean of branches up to 80 feet from the ground were a common sight in the 'New World' as it was being settled by Europeans. William Douglas, who discovered the Douglas fir that was named in honor of him recorded seeing a  Eastern White Pine being 250 foot high. Wood from the trees was light yet strong making it versatile for building and furniture making and it's resinous wood was considered highly decay-resistance. Some say that if it wasn't for the Eastern White Pine the spread of colonization across the New World would of been much slower.

White Pines are prized for there bullet straight trunks, lending themselves to ship building particularly as masts for large sailing vessels. Previously masts had to be pieced together from pieces of Scot Pines but now a single trunk from a White Pine could do the job. Soon the business of harvesting and selling Eastern White Pines became a very profitable industry. 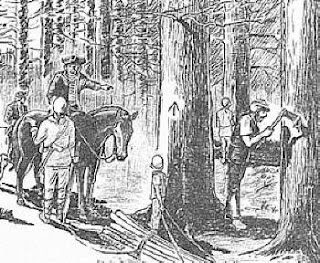 However, the crown claimed ownership of any White Pine over 12 inches in diameter and marked trees with the Kings Broad Arrow symbol, a series of three hatchet slashes on the trunks regardless of if the trees were on private land.  Britain's Royal Navy needed to maintain its dominance of the seas.  Eastern White Pines enable the fleet to be built from lighter wood creating faster vessels making a formidable force to reckon with in any battle.  To cut down a tree marked with the Kings Broad Arrow lead to a lengthy prison sentence so trees that were marked often fell to mysterious forest fires or targeted for vandalism in defiance.  Soon the practice of cutting down any  Pine was considered dangerous as you couldn't prove that it didn't have the Kings Broad Arrow. 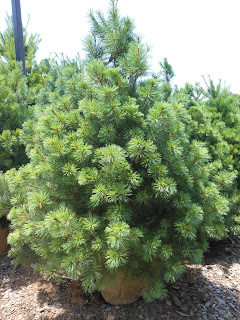 Though stooped in American history the Eastern White Pine hasn't been embraced as a landscape tree.  The desirable characteristic in the lumber trade of bare trunks until you reach the canopy doesn't lend themselves to screening very well and they are known to drop branches in snow, ice or heavy winds.  Its popularity as a cut Christmas Tree has also decreased with Fraser and Noble Fir to reign supreme.  I've heard many customers refer to White Pines as junk trees which is such a shame as they should get as much credit for this countries independence as our founding fathers.  Maybe this year I'll raise a Pine flag and toast its honor with a lovely cup of tea, some habits are hard to give up. Vive la Revolution!
Posted by Robert Woodman at 2:33 AM

Email ThisBlogThis!Share to TwitterShare to FacebookShare to Pinterest
Labels: Pine