Knock Out Rose - The new Elm?

I have a doomsday concern that I touch on a few posts back that has made me very worried.  I've noticed that Knockout roses are begining to show a weakness that should a disease successfully penetrate its armor it would spread rapidly through their population due to the frequency of their mass planting.  If we look back in history we have seen epidemics like this in the fate of  American Elms and Chestnut trees.

The story of these two great American trees is one of introduced foreign pathogens and the trees inability to adapt to the new danger.  The countries where the diseases came from had similar species that had co-evolved with the diseases and could survive an attack but on foreign soils the diseases had free reign.  Chestnut and Elms occured in such great frequency that a disease could skip from one tree to another without having borders to contain its spread.  Their stories are quite interesting and worthy of further reading but I'm getting off track. 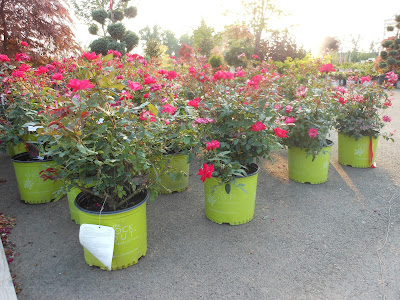 Knock out roses were hailed as the greatest thing to happen to roses since the introduction of the first, single red in 2000, that was chosen for the 'All American Rose Selection' award.  Easy to care for with a long flowering period without the need to dead head and disease resistance.  Couple all of this with an agressive marketing campaign and you have an instant winner.  Pretty soon all the customers were coming in brain washed to say 'Knockout rose, Knockout rose'!  Now the new problem was that none of the other roses were selling even if they were also disease resistant.  After that, they took over like an invading army, sweeping across commercial landscapes to developments and into our own back yards.  I admit to owning one, a beautiful double pink that I bought for my wife as a Valentine gift, though at that time just a pot of bare stems in February.  It lives up to all the expectations and hasn't disappointed yet.

This year we have seen the increase of an incurable disease, 'Rose Rosette Disease', probably brought on by a mild winter and the increase of mite infestations. It was first described in 1941, tied to the increasing popularity of the Japanese Multiflora roses, recommended at that time for erosion control, living fencing and to attract wildlife to your garden.  The negative was that the Multiflora rose is greatly successful at producing a lot of viable seeds that will take over and choke out other plants.  Multiflora roses are highly susceptible to Rose Rosette Disease and at one point it was suggested that the disease be used as a biological control to stop the spread of Multifloras.  However the disease quickly spread and transitioned into cultivated roses and has remained in our gardens.

The disease is known to be spread by 'eriophyid' and 'rose leave curl' mites, which are easily transported in the wind up to 100 yards from its orignal source due to their extremely small size.  Just being down wind from infected plants will put you at risk.  Symptoms don't show immediately and detection of the mite is near impossible unless under a microscope, which even then are difficult to see.  Once the contorted stems begin to show the only control we have is to remove infected plants as quickly as possible. The disease will enter the plant it is spread through its vascular system so pruning affected areas is not an option.  It is not believed to be a soil borne disease so new roses can be replanted as long as the old rose's roots are completely removed. 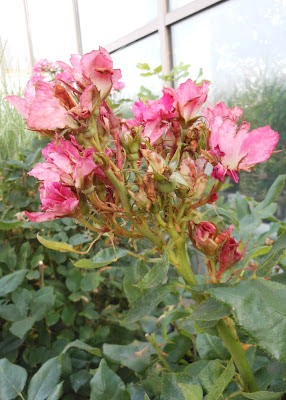 Disease symptoms vary with rose cultivars, but combinations of all or some of the most distinct symptoms are used for diagnosis

It's ironic that the  success story of the Knockout rose could be its down fall due to its susceptibility to Rose Rosette Disease. Unfortunately the mass planting of Knockouts across the country will act as a highway for the mites to travel in the same way it swept through the Multiflora rose population.  I'm hoping I'm wrong but evidence seems to weigh in favor of this prediction that the knockouts may be down for the count!

Posted by Robert Woodman at 4:04 AM